Hakuchi-Fall a sacrifice to delightness 7" 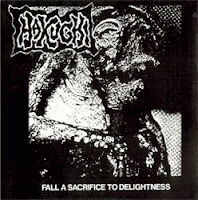 Here 's a crust band from Japan with rare and hard to get releases: Hakuchi were a pre-Age band, they formed in early '90's and t heir discography is:World in the mess (1990 or '91, demo tape), Fall of a sacrifice to delightness, God's disturb 7" (1993,Overthow), Niigata City hardcore (7" comp. w Disarm, Frequent, Rustic Top Dogs on MCR,1993). In 1998 the Once the war started split lp w Disclose saw the light of day on Love & Hope Records, hakuchi's side included tracks from their demo,the 7" comp and God's disturb.
I dont know if this is their complete discography so please fill the blank lines in you know anything. Hakuchi translates idiot but the ep you got here is not an outcome of idiocy: It was self-released by the band in 1992 and delivers excellent japanese hardcore: The typical rough japanese vocals are here, drums work in hight speed, there are tuned down guitars with catchy riffs.An insert with lyrics and other infos was included.
Tracks
01:Intro
02:Innocent slave
03:Delightness of tomorrow
04:Profit
05:Heads and tails
06:Body lacking of soul
07:Fight with enemy 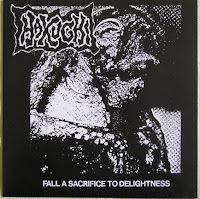 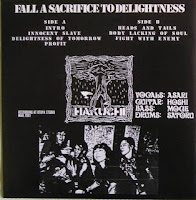 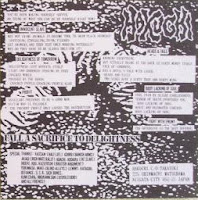