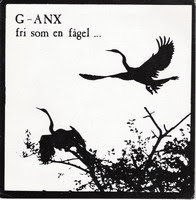 Another old diamond and this time we got a split ep with two legendary bands from Sweden: Fri Som En Fågel… was released in 1988 by Gore Core Records, it came in colored vinyl (there were red,blue and yellow copies) and included two of Sweden's finest acts of late '80's and for both this was the first official release:G-ANX need no introduction, their ep's are already posted here and here, check these posts if you already haven't for more, just to add here an interview with Patrick(vocals) of No Te Calles Fanzine.
Filthy Christians formed in 1985 and included Per Thunell, vocalist of Protes Beng in their ranks, they played in many gigs in Sweden, in the next years they recorded three demos, in 1988 they released the split with G-ANX, in 1990 the Mean lp (and they became the first Swedish band on Earache Records) in 1992 the Nailed cd was recorded at Sunlight Studios and produced by Tomas Skogsberg, they also appeared in the infamous Grindcrusher compilation along with some monsters of extreme metal such as Carcass, Morbid Angel, Bolt Thrower, Terrorizer, Napalm Death etc. When F.C called it quits, members went on Bruce Banner and BombKlan
Here we got one of the blue vinyl copies, the record comes in gatefold cover and includes special thanks and some funny artwork, a sheet with lyrics was included too. Filthy Christians tracks come from their second demo tape: imagine the crust brutality of Bombanfall enriched with some grindcore hints that po p up here and there. There are brutal vocals, rough guitars, beat changes with slower parts followed by fast outbreaks, there is a grindcore feeling but this is not the grindcore as we know it, six tracks are delivered and some of them last less than a minute. On the other side, G-ANX deliver five tracks of their powerful and aggressive hardcore, very fast, fierce, angry and raw and without the acoustic parts that appeared for first time in Far Out.
And the rant will finish with something written in Blood Sisters:"Carl of I Love a Parade, whose old band His Hero is Gone once toured with someone who played in G-ANX, reports that the name (being Swedish) is pronounced more like "yonks" than like "gee-anks" or "ganks." Also it apparently means "pregnant duck," but I'm a little dubiouser on that one". But then Tony said that "We always said "GEEe-Annks" in Swedish". And why G-Anx are included in Blood Sisters? Because of a girl who used to handle bass duties.. 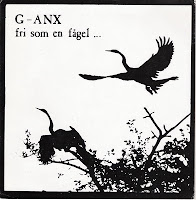 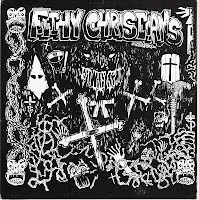 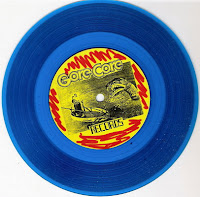 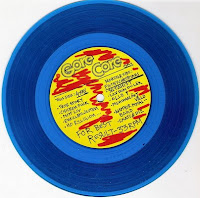 hey! it's been a long time but i`m employed again (damn) and i have limited access on a shitty prehistoric computer. so here i am, bringing to you our demo/rehearsal. maybe you can check it out and hear how hard we suck. although its a shitty- 4 months old- early rehearsal recording, we've been through a lot of progress, and we actually have much more songs and some nice covers (terrorizer, wolfpack, etc. just to name a few)
so tell me what you think!

cheers and until next time!

hi Nico! thanks for passing by and dropping a few words,its nice to hear that you got a job.things are getting worse here on and on.
i'm listening the demo right now,nice shit there despite the raw sound,Police bastard and Utopia burns are great and La muerte tu perdo¦ün is very good, Rencor and Exterminio humano sound ok,the truth is that the raw sound is weakening the final result but the band looks to have the skills (no sloppy drumming, nice breaks and beat changes etc) and with lot better sound and production it would be great.nice effort and keep it up man,wish you the best and soon to record songs for an official release,
cheers! :)

hey thanks for the words, im sure the next recording will be much better. im sorry to hear things can get and keep getting worse over there. i hope there is, somehow, a solution.
thins here haven`t changed at all. prices are always going up, but every one just takes it as if it was ment to be this way. but at least i got a job, these last 3 months were rough months, but finally its over. nevertheless, the band's making lots of progress, and there's been quite a bunch of gigs lately, so for now this is enough.

hope you do allright! until next time, cheers!!!

Not my cup of tea but thanks for sharing. I'll give it a couple more listens, see if it grows on me.

thanx for sharing billy
another one that kills...

Wow! Nice find. I forgot G-Anx even did this split. I also never got me a copy of their EP you just posted, so thanks for both of these rippers!

thanks for the comments :)
Mike, we are the last of Mohicans lol lol lol
dyskola ta pragmata k oso pane...

hey i was wondering if you know if the blue version is first press? i am having a really hard time finding this info, thanks.

hey Anonymous,i don't know if there was a second press,i just know that the split came out in several colors (blue,yellow,pink)the same time.