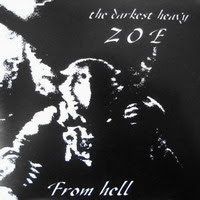 This is the last post, the last month i had many thoughts about it and finally i decided it. Whisp is too busy to take over and i have some reasons of my own to to stop updating the blog.
So this is it but this is not the end, probably there will be a come back but is too soon to say when, its hard to quit from something you love and when you have spent so much time makes it harder, but sometimes is necessary to have a break
-----------------------------------------------------------------------------
Metallic crust from Osaka, Japan: Zoe formed around 1997/98 by members of Gloom but despite the fact they were born from the line up of a crasher crust band they deliver something completely different: They sound like a 21th century incarnation of Amebix or like a band that was created in a laboratory of a lunatic scientist who's obsessed by Amebix legacy
They had many line up changes until 2002 when they recorded "The Beginning" demo ep, their discography includes From Hell 7" (2003) and The Last Axe Beat lp (2004).
From Hell was released by Crust War Records in 2003, actually Crust War released all Zoe recordings, (Gloom members were involved with the label and Crust War zine as well). Music wise this is Amebix worship as it can gets. Tm Spider (guit/vox) did the lay out and production, there are three tracks here delivering tunes that could be played by Amebix back in days of Arise and Monolith, first track is too long (about 5:30) while the whole record lasts about 8:30"), these tracks were supposed to be released in a split with Effigy that never saw the light of day, thats why both bands have a ep called From Hell
Apart from Gloom, Zoe members were also involved in bands such as Algolagnia, Warcy, Framtid and other Osaka crust acts, (the insert has their history but is in Japanese), they also appeared in All Crusties Spending Loud Night dvd, in a Amebix tribute comp. w Japanese bands and The Darkest Four tape. MCR Company did the distribution in Japan, some copies must be still available 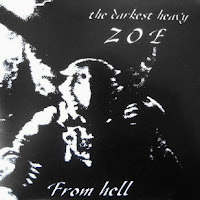 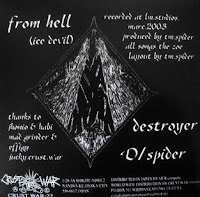 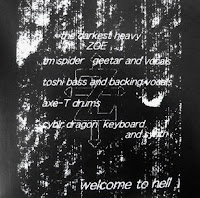 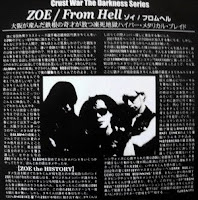 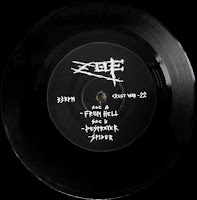 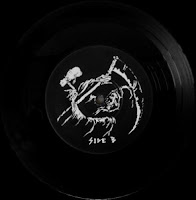 Enjoy your break, dude. I'll miss the updates, but if a little vacation will help you and the blog, I wish you a good one!

This blog has been the source of some great new sounds for me since I found it. Always liked it better than some of the others out there because the posts weren't just album art and a .rar link. Some blogs seem to go out of their way to make readers forget that real human beings are doing the posting. I liked the fact that you guys weren't shy about posting thoughts and opinions... keeping things from getting completely impersonal and anonymous.

Thanks for all the effort and heart that you put into this. Hopefully this won't be the end.

-K
P.S.: Thanks for this Zoe upload. It was the one release that I was having trouble tracking down.

Have a good one Billy you deserve it after all the hard work you have put into this thing. This will be a good time to go through all the previous posts in case I missed something. Take it easy man and thanx for everything.

I will really miss your updates.
As an old git in the middle of nowhere, this has been my main source of music update for about a year.
Thanks

i hope we will see us later again!

Cheers for everything so far, I've grabbed some classics from here.

all the best to you!

great blog! please check out or maybe add this to your links:
http://noiseboxmusiccollection.blogspot.com/

we share same interest in music. thanks and keep up the good work!

This is a solid release! Thanks for uploading!

omg, i can't believe it's over. you rock dude, good luck in your future travels

Summer's over dude, put down the retsina bottle and start ripping some 7"s! :D

Jokes aside, it's good to know that this was just a break and not the end!

there are many bottles to drink and summer's not over yet :)
nice to see you dim

Always a great site with quality rips and info unlike the majority of punk blogs, plus you guys stick to out of print / rare stuff instead of recent releases. I'll be looking forward to ver 2.0