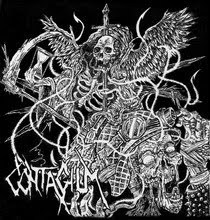 Well, we are back after this break, actually was not a break since Crust Demos was active these past months, anyway, break, hiatus or whatever, here we are again. New oldies are added in my 7" list, some reposts are going to appear, some new ep's were sent by the bands, Whisp is moving in a new place and will be away for a while so i have to do the usual job.

Rob of Contagium sent this ep while the blog was active (or in break time, i don't remember..) and was indexed as a spam, finally i got it and despite it has been posted elsewhere i think it deserves to be here since its a great record and a hopeful beginning of a new band
Contagium (The causative agent of a communicable disease, in Latin) formed in Halifax, Nova Scotia, Canada in 2008 and about a year ago they recorded a demo delivering five tracks of stenching heavy metallic crust having its root in the UK crust scene of '80's. back in the day there were a powerful new track (Remains) with better sound quality in their myspace revealing the abilities and power of band, a few months the ep came out on Black Raven Records consisting of this track plus two more stenchcore anthems. The stuff is heavy as hell with metal influenced guitars, mid paced beat with some fast outbreaks, screamed/yell vocals, excellent sound quality and the usual artwork for a crust record. Great stuff! A travel in time that brings into present the stenching crust of Deviated Instinct, Axegrinder and the likes, This is thick and heavy, placed somewhere between Misery and Hellshock.
Thanks to Rob for sending this and apologize for being too late to post it, in the meantime the band gave the ep to Moshpit Tragedy, so there will not be any link, go to M-T for it 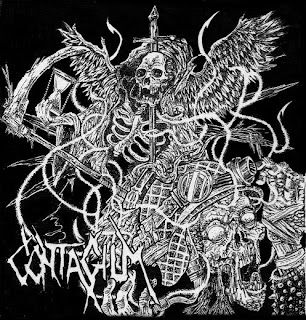 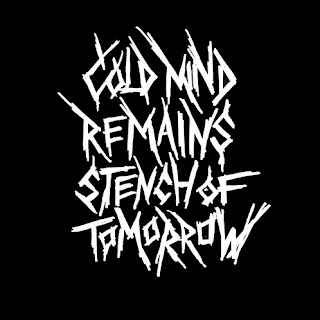 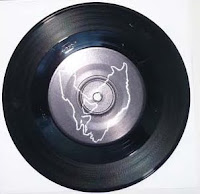 Welcome back! And yes, Contagium rips! I don't download that much music lately and I'm glad that Countagium were the exception because I've listened to this quite a few times. Cheers.

Welcome back! :)
Keep them coming!!

welcome back! keep on posting!

My band played a show with Contagium a few months ago. Great group, good dudes. I'm glad to see more from them. Thanks.

Good to see/hear you back in the mix again Billy. Looking forward to this and your future posts.

This is damn good! Nice atmosphere; heavy guitars. The band's working on an LP-- should be a ripper.

Good to see you back B.!

thanks guys. Justin its good to see you are back in action again