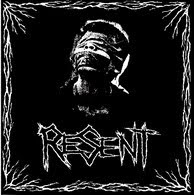 Resent were a shortlived three piece hardcore band from Lafayette, Louisiana, USA. They formed in 1997, they existed for two years, they released a s/t ep and appeared in Profane Existence's "Aftermath" benefit comp amongst many great bands of these days, they called it quits around 1999.
Kenny, the guitarist of the band sent this about a month ago, to be honest i never heard about Resent before but i m sure i have seen the 7" front cover artwork used by another (probably a grindcore) band but can't remember when and what about. (or it was just a flyer?)
Anyway, their one and only ep was self-released in 1998 on green vinyl and only 100 copies were made (fuckin rare, isn't it? in 1999 50-100 more copies were pressed) and delivers four tracks of rough US hardcore, good enough to stare in the eye some well known bands. The sound is dissent and rough and all songs move mostly in mid pace. The dnwld folder includes the ep, some out take tracks, the song from Aftermath comp plus a handful of other tracks in a little rawer quality that were recorded but never appeared in official release, there is also a .txt file with information about the band. 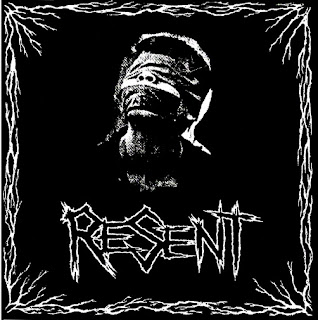 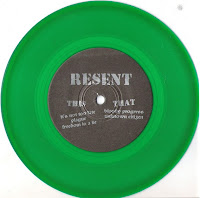 hahahaha,Sean you are right :This was in Blindspot 7" from 1992, Resent redrew it, and why is the laughter? two years ago i posted Blindspot and now i remembe not a fuckin shit, looks like i'm growing older and i started forgetting lol lol lol
thanks

Their contribution to the Agtermath comp. is as swedish as could be! Totally raw sound, as if it were recorded in a basement in the '80s.

& something freaky: have you noticed that, if you rotate the Aftermath cover (B&W version) 90 degrees clockwise (so that'Aftermath' is to the right) & look at it from a distance, what you see is something like Louis XV's bust? I dug my copy out yesterday & left it lying like that on the couch overnight - I freaked out when I saw it this morning, haha!

thats the aftermath of drinking all night lol lol lol
i don't have the record, i found the cover in PE's discography,i rotated it 90 degrees clockwise and i see something looking like a polar bear, or a sleeping dog or a butchered pig head....(roll eyes)
no i'm not drunk and the shrink said you have to avoid any disagreement with me and tell "yes" all the time :)