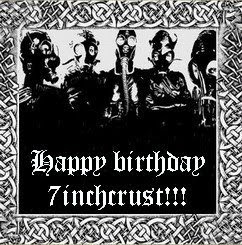 We have birthday today:it was March 23th of 2007 when this blog started with this post, both i and Whispy have spend much time, we had our ups and downs, sometimes this page was crowded and sometimes a ghost town and now after two years we don't feel tired yet and we want to go on until the day we run out of blurb, records, beers and will to continue. we want to thank all visitors and bloggers who helped us by adding our link in their blog, contributing records, adding infos, correcting the mistakes or just stopping by and saying a few kind words
One year before and the post was this. Seems things getting worse every year: Before twelve months we had government's attack against working class through the reform of social insurance system, now and while depression makes corporations and banks lose billions, government still remains devoted to neoliberal ideals and offers help of billions in banks and once again turns against people with new taxes. The same time companies reduce wages and working time making it flexible, company owners commit suicide, unemployment rises and the public procecutor of supreme court finds the right time to start campaign against squats...shit is everywhere.

This one wasn't sceduled to be a celebration post, actually last night i realized it was the birthday date. Anyway,"Lust auf tanzen!" is a 7" compilation released by Schandmaul Records and Seegang Platten in 1998. I don't know anything about Seegang Platten and only a few about Schandmaul, it was a Berlin based label, in Discogs appers only this compilation and a 10" by a band named Revolte released in 1998 too.
The bands featured here are (almost all) unknown to me:WutEntbrannt deliver two tracks of rough crusty hardcore, Asmodinas Leichenhaus is a fastcore act and bring one song of grinding delirium, White Rabbit were from Beograd, they offer one track of midpaced hardcore with female vocals, Kuchenmesser Nr 8 are in the hardcore fields too but a bit faster, Mrtva Budoucnost is a crust band from Czech Republic and deliver one powerful crust song ,Kort Prosess is the only band known to me, they bring one track,(Kjelli says "the kid with the removal face" is a Dr & the Crippen cover), Burned Out is the last band bringing two tracks of raging hardcore. Apart the from Czech crusties, White Rabbit and Kort Prosess the rest bands come from Germany, if you know any infos about just drop a line (i hope the usual suspect about the German scene will enter and enlighten us again)...
The artwork is black and white copy paste lay out and the package is awesome: There is no neither standard folder nor gate fold, the whole package is the sixteen page mag you see bellow and the vinyl is placed inside, each band has one page delivering lyrics,some statements or artwork plus some pages for the guys from the labels with some personal stuff and a few words about the record, most texts are in Deutsch
This comp. can be found with two names:"Lust auf tanzen!" seem to be the title, though on front page its says "Drei akkorde..Freihet" and could be taken as the title too. ( google search gives results for both titles for the compilation), Heart Fist has still some copies

ps:7inchpunk is back in linklist: Todd's mail explains what happened so there is no reason neither for removing it nor for bad feelings (that i never had, furthermore i dare to say i felt flattered when i saw my crappy writing there)
As for Stew, is worthless to say anything, only this: its a matter of using someone's word behind his back,a matter of copying/pasting someone's effort for your own shit without saying anything where you get this. Excuses are easy to be found but all these crap about copy right and blending punk ethics and way of thinking with stealing music and capitalistic standards about property or even the lessons on anarchy (ha!) is bullshit (a 'thank you" for the once "i have a deal for you".. do you remember?) and reflect your respect on other's effort, grow up first kid, start thinking, learn some things and then we may discuss 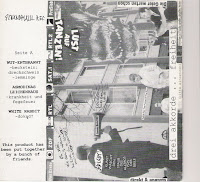 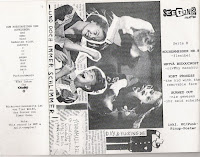 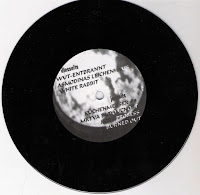 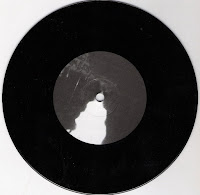 Happy B-day to us then! I know the comp. as 'Drei Akkorde... Freiheit' - I never realized it has a second name. Let me just add that White Rabbit are the from ex-yugoslavia & something of a legendary band; they evolved into some cult-type thingy with the same name, I seem to recall. They also have a super-rare, I hear, demo out from the mid-80's which is pretty interesting.

I know Daniel from Schandmaul he's a great guy.

we released the REVOLTE 10" together with some other labels (actually REVOLTE was the band I started my label for 10 years ago! more about them and their discography here: http://bavarianmayhem.blogspot.com/2008/08/revolte-discography.html) and I had posted this comp myself quite some time ago on a request from irishdave.
sad but true I haven't seen him in years...

but I know that he did release more records than this one and the REVOLTE 10".

hi Pope.
thanks for the infos, i didn't see this post on your blog (i need to start taking a trip to blogs again, there's no no much free time and when there is i'm not in the mood..)
Whispy thanks about WR, i just found in Corpus Delicti a bootleg
cheers

actually WUTENTBRANNT are also old friends and so their discography is posted on BAVARIAN MAYHEM too. their bassplayer later played in QUATTRO STAGIONI and helped out MÖNSTER on their last tour and one of their singers now plays drums in DOOMTOWN.

BURNED OUT's 7" and their split 12" with AMEN 81 are posted on AM I MEAN? brilliant band which just released their discography 12" which I highly recommend in case you don't have the 7" and the split 12"!

on a sidenote: the REVOLTE drummer now plays in LEATHERFACE!

thank you both guys.
Pope i m going to get the stuff from your blogs :)

Hurrah! An anniversary well worth celebrating and shouting about. Here's to another year of noise, trouble-making and laughs - cheers!

Hi Durruti,
its nice to see you again.
and hope to see updates in Old Punks Never Die.

Well done guys on another year of existence. From the beginning this has been a blog always worth checking out. I only wish that I had the time to download and comment on every post. looking forward to this one, thanx again guys. justin

Thanks so much for all the time and effort both of you put into this blog. The selection of music is great. I especially love all the detailed artwork you take the time to scan. Its the next best thing to having the record in my hands. Thanks again for everything.

I still have this comp. for sale. Actually a lot of the stuff posted here I still have for sale. It was always called "Drei Akkorde ...Freiheit".

Hi Flo,
i guess now there is less stuff for sale posted here:i checked your site, i removed the links from 7"s that are still available and put Heart Fist's link there. i ll check back in case i missed something (probably i have missed but no much free time right now)some time today
We always check the label that released the record and some labels with many records in their distro (Power It Up etc) and then we post, well seems we failed in many cases... :(....

Submit your blog or website now for appearing in Google and 300+ search engines!