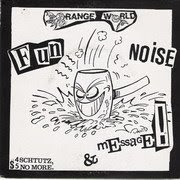 Orange World were from Switzerland, they were a pre-Earth Citizens band: According to the text on back cover, they formed sometime in 1986-87 as Garbage Pail Kids, they played two gigs, they split,they formed back in 1990,they played two more gigs and finally they became Earth Citizens.
"Fun, noise and message" was recorded in July of '88 but wasn't released on vinyl until 2001 by Strongly Opposed Records and this is their one and only official release. There are five tracks here in rough mix coming from several demo recordings (there is a little mess :The short bio on back cover says they formed in '87 but "Bombs from the sky" is noticed as a recording from '86).
Music wise this is hardcore with some thrashing outbreaks ("Thrash attack") and slower parts ("Forever young") and there are moments they sound like a UK punk band("Holy war").
Lyrics are printed on cover, Ninja (vox/guit) wears a Napalm Death t-shirt in this photo so we know some of their inspiration (back in these days i had this Life? t-shit)
No much infos about Strongly Opposed Rec.s on the web, Earth Citizens appeared on "Think Globally,act locally" double 7" comp of Profane Existence in 1993 and some of their releases float on the web and can be found in obscure distros here and there.
I know this is going to be a let down:because of the funny name instead a Dis-whatever, the funny artwork instead some black/white anti-war stuff, because of the title, because its an unknown band...so what? 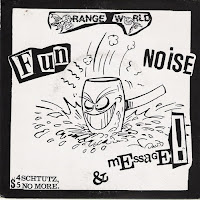 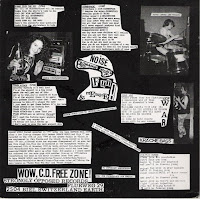 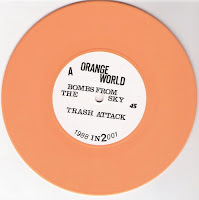 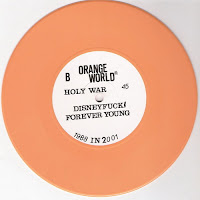 things are different for me:i have this Orange World ep but i never heard anything from EC. maybe this is weird cos EC released a few records and not only a 7"
crustybeckham.. Beckham of crust? this is nice nick :)
thank you for the comment anyway.

some of the strongly opposed and other fine records you'll find here: www.rinderherzrecords.ch.vu
label/mailorder located in biel / switzerland