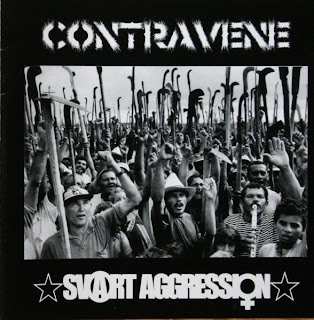 Strictly speaking, this is a repost - Billy's original post-&-blurb can be still found here. Honestly speaking, this is one of my all-time favorite crust 7"s & this is the reason I chose it as my next post (it also marks the occasion of our statcounter hitting the 300,000 mark - onwards crustian soldiers until half a million visits are recorded...).

Both bands are/were major players in the scene, so I'll keep it short. Contravene (websites here & here) came from Arizona, of course, & are the people behind the Catchphraze label. They produced a series or excellent anarchopunk recordings, one (a long one, in fact!) of which is presented here: their eponymous 7" (self-released, 2000 - repressed, & therefore plans to post it have been postponed), the 7" presented here (Catchphraze, 2000 - the Contravene tracks are from the same session as their eponymous debut), the 'A Call To Action' LP (Tribal War/Skuld, 2002), the 'Prison Sells' 7" (Catchphraze, 2003), & the split 7" with Uprising (Catchphraze, 2004 - still available & also presented here). Plus the 1999 'Forever In Struggle' demo tape... Plus, they seem to be great people & with a great DIY ethic fully reflected on their work in Catchphraze.


Sweden's Svart Aggression are, of course, one of the Operation spin-offs (the other one being Protestera), albeit one that traded the harsh anarchopunk sound of that band for something more venomous - they absolutely shine in this 7", that's for sure! They also have a split 7" with Kaaos out - I had some trouble pinning that one down, & ironically enough due to the fact that Kaaos are in it although I wanted it for the Svart Aggression tracks... Apparently, Scream's Pawel will be releasing a 7" in the near (?) future - I'm certainly waiting, although I'd prefer a full length or even more; I just can't get enough of this band (& two 7"s in ten years are way too little anyhow).


OK, I said I'll keep it short, so I will. Download this, you're bound to fall in love with it.


P.S.: 7inchpunk & Seeing Red were removed from the links list on account of stealing posts from this blog. Todd of 7inchpunk wrote me a polite email & was all around nice about it (I just left a comment in Stewart's blog, so I've no clue how he'll react), so no bad blood whatsoever. Nevertheless, I do have very strong feelings about plagiarism (Billy less so, but then again he's the kind soul in this blog) so this is my innocuous way of making them known - I expect neither to be harmed by my removing their links, this is the virtual world after all...

P.P.S.: What ever happened to Scrounging Cider, Hidden Flagon? I loved that blog :(...
Contravene:
01:Stand up and resist
Svart Aggression:
01:Skit system
02:Mordare 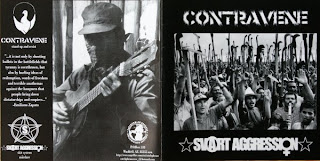 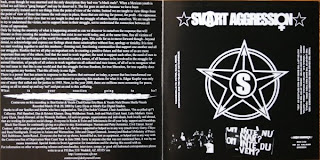 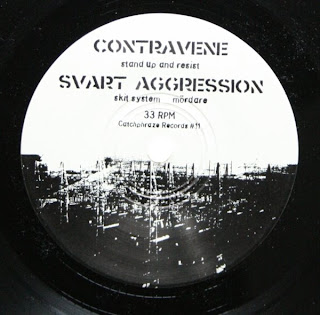 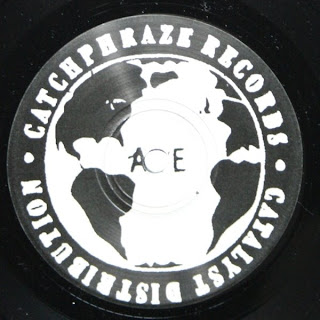 today i found about Scrounging Cider,Hidden Flagon too, blog is deleted...
was Irish Dave the guy who owned it?

the split is just awesome,each time i listen to Stand Up And Resist i remember the day we were listening it while driving to your home and i wanted to stop by the lake and throw you there...
lol lol lol
some times i regret for things i have done and some times for things i haven't..sure i should have done it lol lol lol ;)

Yeah, you should, it'd have saved us all a lot of trouble! You'll get your chance, though, I'm not through w/ you...

& yes, Irish Dave was doing Scrounging Cider, Hidden Flagon; he seems to have started another blog half a week ago at least: http://psychoticoverreaction.blogspot.com . Thank dog for that!

thanks for this please check out my blog its only starting now
peace
ray ss
http://friendlyparty.blogspot.com/

Hi Ray ss
Kaaos/Svart Aggression is planned to be the next Whispy's post in 7inchcrust, now if you want it to post it in your blog too its ok.
thanks anyway :)
cheers

Hey Ray, that's cool! Let's plan to post it on the same day if you want - kinda like a statement no one can understand :). I've done the scanning & ripping work a couple of months ago, so indeed it'll be my next post (on Sunday), but - again - fell free to post it simultaneously or even before. Musical pluralism is key! Plus you can hear some pops in my copy :)...

Actually let's make that tomorrow- Friday the 13h, haha! Can you make it?

i can't keep the secret anymore,i need to tell the truth:what i said about the lake in my previous comment...wasn't completely true..something happened there...
in case you didn't get it... Whispy's real name is Whisper Jason Voorhees....
thats why he wanted to post in Friday the 13th...
this is the truth..
and this is Crustie Krueger speaking from Elm street.. >:)
lol lol lol lol

Thanks again! Just saw a post in your blog about anonymous posts, sorry for this, but some in Central Asia and Chinese areas (like me) don't use names because we can only see and use blogs with illegal software. Use of names can possibly lead to problems, pls understand. Btw your blog rules. Good reviews, good records.