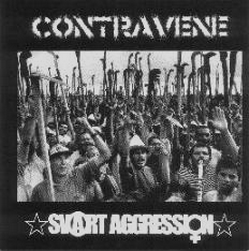 Peace punk from Arizona USA vs crusty hardcore from released on Catchphraze Records (Contravene's own label) in 2000. Contravene were an awesome act from Arizona, USA but unfortunately now they called it quits. Their released several ep's (st, Prison sells, a split w Uprising ) and the A Call to Action lp plus a st cd (partial) discog. From their beginning in 1999 and Forever in struggle demo tape they were getting better and better in every new release plus the fact of their great lyrics and being nice people. (How many punk bands out there have an acoustic track that doesn't suck? just listen to the In the Name of Convenience in their myspace) Here they offer one track about 5 minute long, with a collage of political speeches as intro, that turns into a anarcho-harcore storm with catcy riffs and political lyrics.
Svart Aggression from Sweden included former members of Operation, they released this split and a split with Finnish vets Kaaos. Here they contribute two tracks very similar to Contravene's stuff but a little bit more metallic and crusty. Actually if someone doesn't this is a split,there is no chance to discover there are two bands here since there are no big differences between the bands. Both bands have female/male vocals, the record includes a booklet with lyrics, song explanation etc. 1000 copies were pressed on black vinyl.See some reviews here

Tracklist:
Contravene side:
1. Stand up and resist
Svart Aggression side:
1. Skit system
2. Mordare 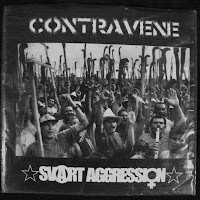 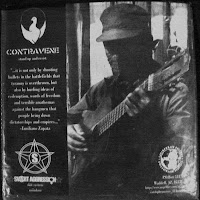 This record totally blew me away when i got it from the nice people in Catchphraze. I knew Svart Aggression from Operation (what a band!) & Protestera & i wasn't disappointed with this release... I still wish they had put out more stuff (their split 7" with Kaaos also rips, but not as much as this one here). You should also try to get your hands on the final Contravene split 7" w/ Uprising - a very nice record, made by very nice people.