When the discussion is about 80's crust then Antisect is one of the band that you have to talk about. And if there is a special category for the greatest of the great crust ep's then Out from the Void is one of the records that belong there. It is one of the records that have set the standards for the metal influenced crust, the same way Amebix, Hellbastard, Deviated Instinct, Concrete Sox, Heresy and others did same. This classic piece was released in 1985 by Endangered Music, (EDR 4) and was the epitomy of crust in its beginning as a genre. In 1985 Antisect had already released the In Darkness There Is No Choise lp (1983,Spiderleg Recordings), a great record with anarchopunk/hardore influences but Out of the Void is more into what later was called crust. The vinyl delivers one track on each side, both tracks are untitled but you can see the lyrics in a high resolution scan, here. Antisect called it quits before release another record. Apart from their demos, numerous tapes and vinyls with live recordings poped up,here some of them
Live General Wolf,Coventry, (from 1982),
Live in Fulham (1983),
Live in Leeds tape (1984),
Live in Brighton (1985),
Hallo There,How's Life?lp (1991,Spiderleg),
Live in Darkness lp(1991,Clown Records),
Peace Is Better Than a Place in History lp(1993,VinylJapan) and many othersSome scanned Antisect stuff is here
Tracklist:
1. Out of the void pt I
2. Out of the void pt II 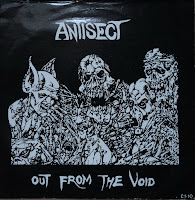 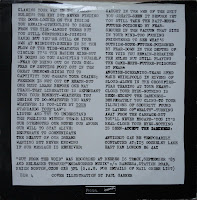 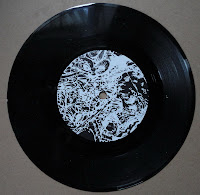 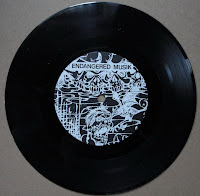 Holy Scripture. I have a spare for trade(preferred) or sale

is missing the link.

Gonna see them at Chaos this year. Thanks for this.