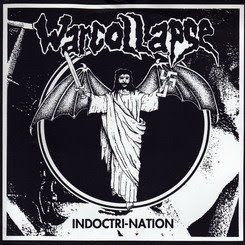 Its been a long time since i had the thought to post this but since it was available from a major distro it had to wait for its turn to come. But seems Power It Up sold the last copies during the Christmas holidays so here we go:
No much to say about these dudes: Warcollapse started in early 90's under the name Earcollapse . Back in their early days(92-94) they were creative and apart from two demo tapes they released several records (split w Extinction of Mankind, split w Disrupt, the "Wantering in Darkness" 7",the "Crap,scrap and unforgivable slaughter" 7" and "Crust as Fuck existance" mcd.
In 1996 Skuld Releases put out the legendary Whispers 2xLP comp including Warcollapse's "its time to" in the bonus 7". One year before and after the central Europe tour in autum of 1995 the band entered a period of hiatus until the release of "Divine Intoxication" in 1997 (Mind

Control/Malarie Records). In the hiatus time some members formed a band called Holocrust and released a four song 7", i remember an interview (not quite sure if it was Holocrust interview or just Warcollapse members speaking about Holocrust) that i discovered a few year ago but now seems to be down. Two tracks of the ep appeared in Chaos and Destruction vol 2 comp.
"Indoctri-nation" 7" was their first Warcollapse release, it was recorded in autumn of 1993 and released by Tribal War Records. It delivers four tracks of kang/crustore, lyrics included inside the cover. Because of the shitty pressing of b side the record was re-released by ElderBerry. Cover is folds out and reveals the lyrics printed insideJust to set clear here what azcrust and axegrinder said in the comments about vinyl labels: both are correct: there were printed and blank labels as well, i ve seen both floating on eBay.
Warcollapse members were involved with bands such as Tolshock, 3 Way Cum and others, After a half decade of silence they returned in 2007 with the long time awaited killer lp "Defy" (Profane Existance),one of the best crust records for 2007. They were the last band on stage at Ungdomshuset before the Danish state, city council and a conservative christian sect close the place down.
Tracklist:
1: Rewinding history
2: Bleakness over battlefields
3: Indoctri-nation
4: Encaged 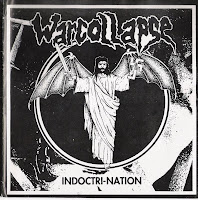 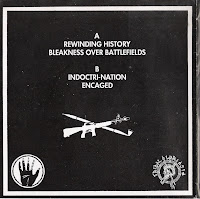 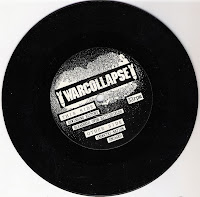 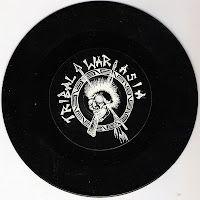 Hey.Nice one!!!
cheers from Serbia

Sure it's not marked? Look at the lead-out groove :). Oh, yes, this is a CLASSIC - thanks!

Nice blog. I will keep reading. Please take the time to visit my blog about Guitar Lesson