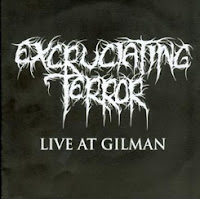 Time to unleash some extreme grinding brutality and start with the usual rant and linking: Excruciating Terror were the grind legends from west coast, they started in 1990 including Javier Arqueros (Nausea LA) and Dino Cazares(Fear factory) in their ranks. They disbanded around 1998 and members went on with Endless Demise and Bloody Phoenix. In these eight years their discography includes:"Vision of Terror" (demo tape,1991), "Legacy of hate" 7"(Torched Records,1991),the"Expression of pain" LP(Pessimiser/Theologian,1996),"Divided we fall" LP (Pessimiser,1997) and a split ep w Agathocles (Pessimiser - Theologian,1997). They also contributed tracks in several compilations including the legendaries "Cry now,cry later" vol 2 & vol 3, and "Bleeeeaaaauuuurrrrgghhh,A music war" 7".
The "Live @ Gilman" ep was released by Max Ward's 625 Thrashcore Records in 1997. Max went to their show and asked them if he could tape their show. ET said yes and "Live @ Gilman" came out from this recorded material. 7 tracks, 10 minutes of grindcore,1500 copies were made,1300 black and 200 red vinyl.
Tracklist:
1: Last act of man
2: Another rejection
3: In control
4: Think again
5: Bomb has fallen
6: Mental prison
7: Another victim 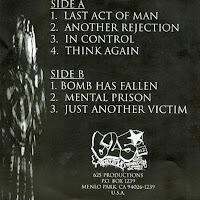 Endless Demise has been dead for months...Vito went back to Nausea (they're doing a CD on FETO, ND's in-house label), and the rest of Endless Demise are starting a new band called Upset (the one track I saw a video of shredded).

Word keeps going back and forth that ED will reunite, but who knows.

HI AND THANKS FOR THE COMMENT AND FOR THE LINK ALSO!I WATCH YOUR BLOG A LONG TIME NOW AND YOU HAVE VERY NICE SHIT LISTENING!KEEP IT UP AND WATCH MY BLOG MORE VIDEOS AND STUFF COMING UP!
ANIMAL LIBERATION=HUMAN LIBERATION