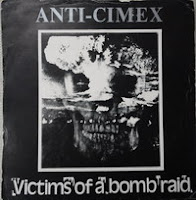 It took some time from the last post and a lot of shit happened but finally here we are again: You know the record, you know the band so only a few words here: Some months ago i posted the Hardcore Horror Records re-issue of Victims of A Bomb Raid (here) and i promised an older pressing so here is one of the diamonds of Swedish punk scene in its first issue: This is the original and first press of Victims of... from 1984 co-released by Anti Cimex and Malign Massacre Records. This pressing came in folded sleeve with lyrics and photos inside and had these little bits around the record title text on front cover, "Anti Cimex" is in this pale gray/silver color and vinyl labels were black, the second pressing was almost the same, came in cardboard sleeve it had the name of band in white but these little bits around the record title, the lyrics and photos inside, all were gone. As i said in the first Victims... post, for some reason the record appears with the name Set me Free in a Maximum Rock N Roll add in spring of '84(check it here)
So this is it. I won't rant much since there is no reason and also no mood (just check the headlines about what's going on in Europe and my country, this shit sucks and even if blogging is a way to escape, things are hard and had affect on you so you can not get away), let me direct you again to the amazing Shit-Fi of Stuart Schrader and his Anti Cimex Archive for many documents and crazy ebay auction stories about Anti Cimex records 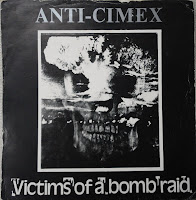 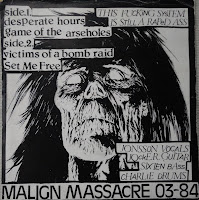 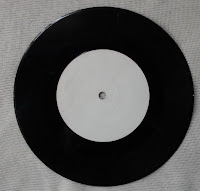 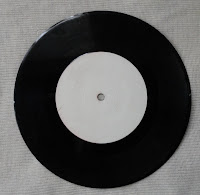 Every time Greece comes up in the news here, which has been a lot lately, I think about you Billy and am hoping things get better. The last few days the report is that the stock market here is not trading well because of fears about the Greek economy, I can't make any sense of it. Your story of the two cows at MR should be shared here for those who want to make sense of it. Take it easy my friend.

stock market not trading well because of Greek economy? i cant believe it!its weird but also it can be truth because of the way global economy is established. this referendum shit made things more worse,Greece is verging closer the default and Greek politicians still wank their games, people are confused and scared but also angry, there are even rumors about leaving Eurozone and return of drachma. One thing is for sure:we are in deep shit, the question is if this is going to be worse and how much worse (and unfortunately its going to last for a long long time).