This was posted in the first days of this blog in March of 2007 and since i have been a Napalm Death maniac and a grindcore freak back in the days of early '90's, i feel the need to bring it back to light, so here it is.
The sound of seminal Scum lp founded what was called grindcore, Scum was followed by From Enslavement to Obliteration in 1988 and there were many versions of it: Gatefold lp, picture vinyl, splatter vinyl and 2 cd versions (28 track & 54 track incl. Scum as bonus). The lp version included The Curse 7" that was given away for free with the initial copies of lp.
The front cover is a classic photo from Vietnam war, children running to escape, one of them is already hit by the napalm bomb. There are five songs here,the eponymous track covers side a and was a new song, its a slow and sick instrumental track that lasts over three minutes, side b delivers four tracks (incl. two one-shot songs of a few seconds each in the vein of You suffer) in the usual ND hypersonic speed and appeared in the cd version.
I don't know how many copies were made, i think i saw somewhere there were 800 pieces, i guess the truth is close to 600-800 copies or so. Anyway this is one of the most obscure ep's Earache Records ever released.
This is vinyl rip and not taken from a cd or whatever that's why the rough sound, this is a 22 years old piece of shit, good as an old bottle of wine, enjoy it and cheers!
Tracks:
01.The Curse
02.Musclehead
03.Your Achievement?
04.Dead
05.Morbid Deceiver 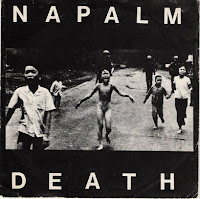 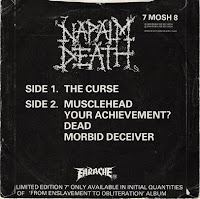 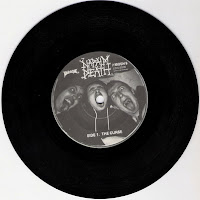 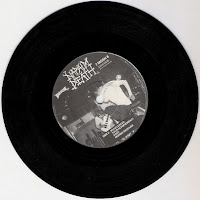 by the way the link is dead. can you re-up this. please

My friend found this a a flea market for $2 LOL He wouldn't sell it to me though even though he doesn't really listen to grind.

wanted to download but I'm not seeing the link.

I've been a lucky boy and got this 7" for Christmas, so good! do you know if it was ever repressed as a 7" on its own or was it just as the free extra with the album?

merry Crustmass lucky boy!as far as i know there wasn't any repress of this so you got an original copy :)

please fix the MF link.. this is actually Mentally murdered 7". thanks