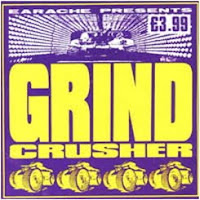 I got sick and m not in the mood for much blah blah, much traffic lately but no comment fedback and using a lo-res viscera word, "It's like a fucking ghost town around here lately..." but lets give it a try:
Earache put out the Grindcrusher comp lp in 1989 including some of the death metal and grindcore monsters of late 80's:Carcass, Morbid Angel, Terrorizer, Bolt Thrower, Godflesh, Repulsion, Nocturnus, Filthy Christians and Napalm Death
A limited number of copies of Napalm Death/Electro Hippies-split 7" was given for free with initial copies of Grindcrusher and made the Guiness Book of Records as the world's shortest record. Each track was about a few seconds long, there was a short groove at the edge of the record while the rest of the vinyl was covered with etched writing.
said 'nuff..lets keep it short for short record,
Napalm Death:
1:You Suffer
Electro Hippies:
1: Mega Armageddon Death pt III 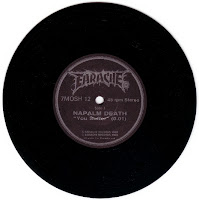 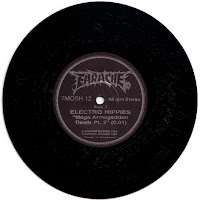 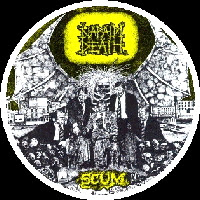 And as bonus, here 's five live video shots of You suffer incl. some old gigs from 1989 and 90 with Lee Dorian handling "vocals" duties.. enjoy it! sorry but no version of Mega Armageddon death here...

Hahaha wow. That is really funny. What a great idea.

When 2 Legends Collide.... Fucking great...those were the days!

Lol. That's great shit. Did you ever shout "play faster" at a concert?

Damn dude I had two copie sof this...bought the LP when it first dropped on vinyl (being informative, not bragging), and years later Digby sent me an extra for the fuck of it (again, info). I loved how they carved all their band's names into the vinyl, like it seemed less a celebration of the who's-who back then, but rather "BUY THIS SHIT TOO".

hey Slobo, a friend of mine had recorded a tape for me with From enslavement to obliteration and the record player in the 45 RPM. and it was ND faster than the ND we all know!
and yeah, its really cool all these etched band names and writings and as Sean said seems like they did the 7" for this.

hope you get well soon Sean

Just wanted you to know that since you still have Genocide SS / Vivisection-split in your wanted list, you can dl it from my blog since I've just posted it.
cheers

thanks! :)
nice blog,i added you in my list.
cheers

I listened to teh Arsedestroyer/Noise Slaughter split-7" on 45rpm for about a year until my mate told me that "those drumrolls are impossible" - I was like "you what?. LOL!

Thanks for that zine - if you have any more that'd be absolutely supercool.