One year after Alexis murder and the following revolt, Greece is in turmoil again . One year before, politicians and journalists, their mental servants, all together in an orchestrated symphony of lies tried to prove that was just meaningless violence and not a revolt.
One year later protestors are back and the fresh new social-democratic gov unmasked the true face behind the liberal rhetoric:Raiding a anarchist social centre and Keratsini occupied Town Hall as well, transpassing the academic asylum and arresting people, apart from police brutality a new way of terror arose: More than 800 protestors were taken to police department just to be identified (and recorded in police files). Riots broke out in several cities(here and here), media and politicians played their role again.
For more details and photos check libcom, After the Greek Riots, Slackbastard(here and here) 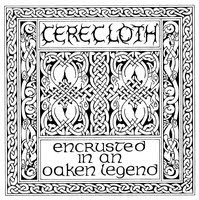 Cerecloth (pronounced "seer-cloth") was a shortlived band from Middlesbrough and a well kept secret of UK's underground scene, they were formed by the guitarist of obscure deathsters Malediction in early '90's and in 1992 they recorded the Godless passages demo tape, one year later they released Encrusted in an Oaken Legend on GWB Records and this is their one and only official release.
The cover artwork is close to the usual crust artwork, music wise this is an amazing blending of Morbid Angel's technical death metal ,Skyclad's metal folk riffs and flute tunes of Ian Anderson (Jethro Tull). Guitar is sick and heavy and enriched by Darren O'Hara's skills, delivers tons of tormenting riffs while rhythm section is in the same level. The similarities with Morbid Angel are obvious (the opening riff of Beautiful Lying Faces is a page taken from Morbid Angel's book) and some slower emotional parts with flute work really nice.
Honestly, i didn't know the existence of this band until the day i discovered this treasure in Wood'sman Axe blog, many thanks to Balbulus who kindly let me post this for you 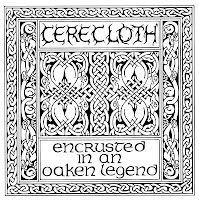 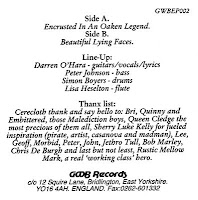 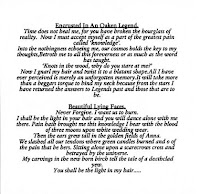 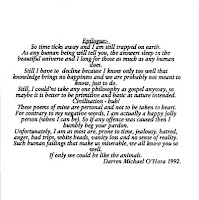 cool i'll take a listen. never heard of them but I love the idea of flute action via crust core

thanks for the comment Jimmy, when i first listened it i couldn't believe my ears, fuckkin awesome record and all credits go to Balbulus

Cheers for the props 7inchcrust, but all praise should go to Darren O'Hara for creating this music. For years I had an image of him as a dreadlocked mystic hermit living in the wilds somewhere. When I finally tracked him down a couple of years ago, it turns out he's now an airline pilot!

well, i had a similar image of him in my mind, a crustie involved with a few bands in a local scene and such stuff but being an airline pilot is beyond my imagination :)