This is politics and its about whats happening right now here, if you don't care just skip it..
2008:December 6, Athens: Alex Grigoropoulos 15 years old was murdered by cop of special police guard who shot him in the chest near the heart. There are eye witnesses telling that Alex Andreas and his friends didn't provoke the cops and they shot with no reason. The murder was followed by a riotous night in Athens, Thessaloniki and other cities all over the Greece. In Sunday 7 December the protest in Athens turned into riot that still continues with more burnt banks, cars and stores. In Monday 8th, demonstrations of pupils attacked against police departments in several cities all over the country, The demonstration in Athens turned into riot once again with dozens of burnt cars and buildings (stores, banks, hotels). This is a kind of Greek LA '92 or Paris 2006 and not only a reaction against police:A social revolt of people oppressed by government's financial policy and unemployment and outcasts who live in poverty and found a way to express their frustration and rise the blind hate and wrath

Alex is not the only victim of police brutality who paid the price with his life,

there is a long list of murder, torture and humiliation, Alex was just 15 years old, he was unarmed, he didn't attacked the cops to excuse a violent reaction from police, he was just a kid..right now while i m typing this, media tell about more riot in Athens and Thessaloniki.. tonight is going to be a restless night..
@ people from UK and all over the globe::BBC's and other major media
reports are hilarious: Alex never tried to throw a petrol-bomb at the police car (there are eye witnesses proving that) and Exarheia square is not an anarchist state inside the Greek state, it is a place full of riot squads and police patrol 24/24.
Some articles reflecting the reality as it is with time line of the facts are in the following links: Tapes Gone Loose, Libcom, Infoshop, Indymedia, Slackbastard blog, RSS New Portal, Teacher dude blog, Center for Strategic (A) blog, Indybay,On The Greek Riots, Balkan Decentralized Network, and wikipedia
---------------------------------------------------------------------------------------------
Artimus Pyle-st 7" 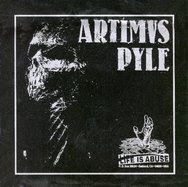 If you are still here...this text bellow was written yesterday before the tragedy happens, check it if you want..:
I don't really have to say much on this since the web is full of resources and you already know these dudes: Artimus Pyle was born from the ashes of Fuckface in late 90's and they have released until now several records spreading their brutal hardcore/crust
The s/t ep was released by Life is Abuse back in 1998 and delivers five pieces of raw hc/crust , songs are short, brutal and heavy, mostly fast in-to-your-face parts reaching the limits of chaotic crust, then they slow down with some slower passages, the vocalist screams desperately the dark and bitter lyrics, the production is decent, the whole thing is a heavier destructive and tuned down of Fuckface's stuff. The vinyl is in sick blue/gray color, side b is one track divided in two parts, "Paint it black" has nothing to do with Rolling Stones and (and according the band's notes) the lyrical content of it was written by a San Francisco homeless and was found in garbage.
The hairy guy on back cover is Thomas Delmar Pyle (a.k.a. Artimus Pyle) drummer of Lynard Skynard and survived the plane clash that killed some of Skynard members
Tracklist:
01:Family tradition
02:Revolution
03:Paint it black
04:Smash the state pt I
05:Smash the state pt II 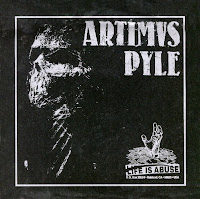 This record rages even as things are beginning to rage where you're at. Billy I've been following your blog for a while now and it never did hit me that you were Greek. Thanx for the comment the other day about that greek blues stuff and I promise I won't post any Zorba :-) Thanx again for this and I hope there is peace in the future where you're at.

Such a kickass fucking band!

hope everything gets sorted out with all that is happening in greece at the moment, heard on the news that the police say he was throwing stones at the police car....so they shot him for that!!! W.T.F!!!

thanks for the comments guys...

what police says is the usual excuse. the kid and his friends didn't provoke the cops, there was not conflict with petrol bombs stones or whatever, only a verbal fight, thats why he was shot. there are eye witnesses telling that the murderer didn't shot in the air a warning shot but aimed at the Alex Andreas side
there are dozens of burnt cars, banks,stores in several cities all over the country..

Justin i m waiting for this Greek music :)

It doesn't matter what the police force says: there's no excuse for shooting a 15 year old unarmed boy & that's about it. I expect anyone - COP OR NOT - who did such a thing to rot in fucking jail (no, I don't want to think about what jails represent/Foucault's critique of the institution of prison in a moment like this!). I want to see a judge passing a sentence on this murderer with complete disregard as to his job. &, as much as I sympathize with the people who suffered material losses from the episodes/as much as I don't see how molotovs help, I find the minister-of-internal-affairs' statement ('the law shall be enforced in all directions') not only ridiculous, at a time like this, but so DEVOID of self-critique that I find myself wanting to single-handedly (single-fistedly, in fact) wipe that fucking smirk off his face. Fucking asshole...

The circumstances are horrible; the rioting is not solving much... but from my extremely complacent corner of the world, I can't help but think what a relief it is to see people showing their outrage. I just wish it didn't have to happen in this way.

Thanks also for the rare record and info about AP.

This is the Greek LA '92 or Paris 2006:This is rather a social outburst than a reaction against police: Unemployment, poverty and oppression found a way to bring to surface the hate,anger and wrath: During the day demonstrations of pupils attacked against police departments in many cities all over the country(Athens, Kastoria, Corfu, Crete, etc). Tonight the night is wilder:The demonstration in Athens turned into fire and hell, right now Athens down town is on fire:buildings, banks, cars, hotels, stores are burning. Fire and looting. there is riot in several other cities (Thessaloniki,Larisa,Patra,Hania(Crete), Ioannina, Corinthos)several protesters were arrested,there were rumors about State Under Siege situation but the government denied everything about it. Greek indymedia site is down so there is no instant information

There's a lot going on in greek sites & blogs but athens.indymedia is, indeed, down so there's hardly any info around in english... I'm still fuming about this, in fact I've been checking news sites for the entire evening & still I can't clear up my head & think straight. I'm just saddened by the course that the demos have deteriorated to looting - such a predictable (& yet effective) old trick... Now they can all go on TV & derail the conversation, dammit!

people are turning into beasts.... so sad, man

hope it will be ok for you guys

Wikipedia already has an article started here, http://en.wikipedia.org/wiki/2008_Athens_rioting Billy it's a sad situation if this is like the 92 LA riots. Senseless violence coming from senseless violence. Now may not be a good time so when you feel like it drop me an email, because I could not find one on the site, so I can send you a rip of those demotic Greek folk songs we had talked about. Maybe you could give me some input. mustard_relics at yahoo.com Like I said when it's good for you and I do hope that something good comes out of all that's going on there.

Justin, thanks for the link.
this riot is a symptom of a sick society and the spark that started the flame was the murder of Alexis. the roots of frustration and fury are in government's financial policy, the arrogance of government's members, the numerous political scandals, the unemployment,(and when you get a job you are not well paid, there is a Dark Ages in Greece about this matter), the dark future of youth, a future with no dreams, maybe it sounds poetic but its the truth. and the whole shitty situation was here before the global financial crisis. so there were reasons for this riot to begin, of course some (maybe the most) protestors are not political aware so beside the political activists you will find chaotic youth kids or just looters or whatever. thats why the looting and burning everything..

Mostly no one's talking about the 7", so I'll just say that I'm trying to collect, translate, & post some articles that I, personally, found stimulating & informative. Come take a look if you're interested: http://tapesgoneloose.blogspot.com/2008/12/riot-info.html
& thanks for the hospitality.

Anonymous said...
This comment has been removed by a blog administrator.
September 8, 2009 at 4:32 PM