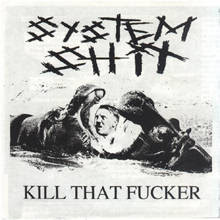 If you have followed the links in the previous post and checked the murder of Alex and the riots in Greek cities then you know why System Shit are two words that clearly describe the situation here: A piece of crap authority sinking into its own corruption and greed and waving the armed hand against society threating those who dare to raise their voice against injustice.
There was a broadcast on tv yesterday about Michael Kaltezas who was shot by the police in 1985. The story is the same, Michael was shot in the back and he was only 15 years old. Riots and conflict followed his death and many protestors were arrested.Melistas the murdered never got in jail.
Alex was only 15 too, his murder started a social revolt bringing to surface the indignation of a generation with no future, doomed in poverty, unemployment, alienated in a shitty way of life in exploitation, oppression and disgust for the injustice for a kid who was murdered and the disgust for a government that cover ups the endless scandals and straggles the lower classes
Right now there are protestors in jail,some of them face heavy charges, government, nights in Athens are still riotous, police and Justice system are going to cover up the murder once again. A celebrity lawyer is the defense of the murderer, media focus all the time in the damages of the stores (yes, money value more than a human life) talking about blind violence (who the blind here?) and the same time ignore the videos that prove the way police acts . As conclusion, the government hopes everything will calm down: "hey, its (capitalistic) Christmas time, lets have fun! nothing bad happened! Consume! the protection of Christmas tree of Athens is #1 priority....
This is the system shit...i could rant more and more but i hope you have already understood what going on here..check the links for more

"Kill that fucker" delivers ten tracks and was released by Tobacco Shit Records, not quite sure about the year, i think it was 1995. System Shit formed in late 80's in Halifax, Nova Scotia, Canada. They started as a noise-joke band, they recorded several demos and according to DRock (vox,bass) the tracks of "Kill that fucker" come from a demo. They have released four ep's (we have posted "Hell-o") and splits w/ Bloody Phoenix and Clustefux
01:No more
02:Utopian dream
03:Bombarder to shit
04:Mr Noodles
05:No difference
06:Sell-out
07:Brutality squad
08:Human greed
09:Slaughter of the innocent
10:War is horrendous (Sore Throat cover) 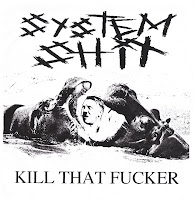 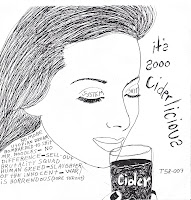 The link doesn't work. Could you fix it please?

link is active again, thanks for the report.
cheers