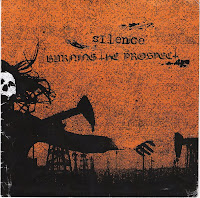 This is an amazing split with two bands delivering some blasting crust tunes, it came out in December 2006 in limited number of copies and it is sold out.
Silence from Poland continue the great tradition of Polish crust bands, they were born from the ashes of Antichrist, in 2003 they released Hypnosis 7'' and that was followed by a couple of 12" (Echoes of Depression,2004, Mad civilization,2005 and a split with Irish crusties Easpa Measa in 2007)
Burning the Prospect started in 2004 and their discog includes a couple of 7"(and splits) limited to 350-500 copies and No Great Design cd (2008,FETO Rec.s), check their myspace for more
This was released by a co-operation of labels: I Come For Your Children(USA), Acclaim Collective (Japan), Right to Refuse (UK) and Sadness of Noise and was limited to 550 copies (according to ICFYC there were only 400 copies). Silence bring two tracks of emotional crust in the vein of From Ashes Rise and Tragedy with thick guitars, dark melodies, hard beating rthythm section and powerful vocals. Bri of Doom did the studio work for Burning the Prospect and the result was a three track assault of heavy and gloomy crust with a touch of Swedish hardcore sound. Sound quality is excellent, lyrics included in the gate fold cover(there is English translation of Silence lyrics, copies for Japan included a sheet in Japanese language) and the usual crust tradition of misprinted track list is here: Paradise lost is the second track of BtP and New reign is the ending song.
Thats the boring rant, now go get it (@320, scans, blah blah..) 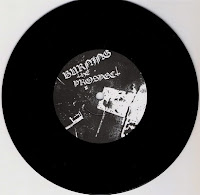 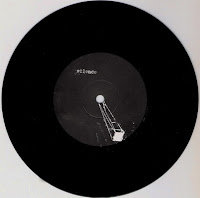 We are an anarcho-punk collective called Acclaim from Japan. Thanks for the review. We already uploaded it on our blog.

Hi A.C., thanks for the comment and for uploading on your blog, i just added you in link list. its nice to see people telling how appreciate what we do and the best thing is when these words come from band members or people from labels. thanks again, best wishes :)

Anonymous said...
This comment has been removed by a blog administrator.
December 7, 2009 at 4:28 PM

hey i got this too and am gonna make my own rips and scans someday
i also ripped and scaned a onesided burn the prospect 7'' with two songs on it, i wont post it cuz its kinda new but if you want it let me know and ill send you the link
also i got a cd of a band from greece called konkave - idocy mode cd on damaged goods productions i really like it do you know about this band
ok
peace
ray ss

Ray i know Konkave, a web friend gave me Idiocy mode but never listened it (yet)
speaking of Greece, see whats going on:
http://libcom.org/
http://slackbastard.anarchobase.com/?p=11256

this Burning the Prospect one sided 7" must be "Fires in Their Cities 7” , right? i would like to listen it, if it possible upload it and send the link via mail at 7inchcrust (at) gmail (dot) com