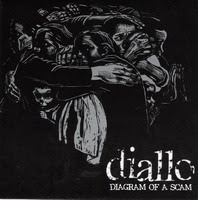 Diallo formed in Connecticut USA in 2000 by former members of many bands including React, Hail of Rage and Kontortion and their legacy is four ep's: Diagram of a scam was their first ep released by Yellow Dog in 2001, it was followed by a s/t ep [a.k.a. For profit ep] on Test Pattern Records (2002) and a split w Exhale from Japan (2003,Cries Of Pain) and a split with Artimus Pyle (2003, Busted Heads Rec.s). The band split around 2003 and members continued in some great acts: Another Oppressive System, Dissystema, The Total End and After the Bombs.
Diagram of a scam tracks were recorded in spring of '01 as a demo tape, the production was good enough and decent and Yellow Dog decided to release this stuff in seven inches. It comes in a gate-fold cover with lyrics printed inside, aesthetically the cover artwork is a first taste of what you got here: Dark and crusty hardcore in the vein of His Hero is Gone. Somewhere on the web i saw a review telling they sound like a brother band of From Ashes Rise: well, the truth is very close. There are nine tracks of raging crust with angry vocals, some nice melodies pop up here and here, the bass is clear and guitars are dark, thick and metal flavored with D-beat parts, some nice breaks and beat changes appear here and there blending HHIG and Dystopia's intensity in the slower parts, the sound quality is excellent, imagine a nice blending of the bands mentioned above and you got Diallo
Yellow Dog seems to run out of Diagram copies, some copies might found in distros 'round the globe. Buck, bassist/vocalist of the band runs State Control blog (Cheers dude! and thanks for the help :) 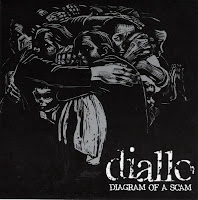 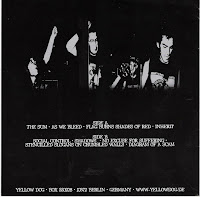 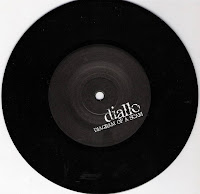 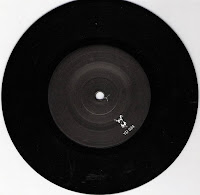 such an awesome seven inch. the demo tape 7" and the split are equally as intense.

A great band & a great 7"... I remember how impressed I was by this slab of vinyl when it came out - you know, CT is between Boston & NY, so I never thought such an awesome crust band could form there.