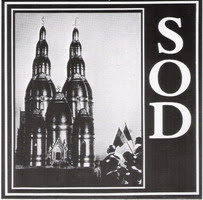 This is Mjölby, not NY: Sweden's S.O.D. started about the same time with Stormtroopers of Death from Big Apple: Their first recorded material was a demo tape from 1983, they released two ep's, Sound of Disaster (1985) and Speak Swedish or Die (1990,Really Fast) and according to Swedish Punk there is the Stabilitet? ep from 1997 on Hepatit D (a copy is still available in this distro) and Lagar Och förordningar boot ep from 2000, they also appeared in some compilations
Actually the copy of Sound of Disaster you got here is a boot too and comes with a big center hole (the ring that you put in the hole and play the record in the turntable was lost in my messed room and it took me centuries to find it). Anyway, boot or not, here you got S.O.D.'s hardcore that stands equal to other Swedish legends of these days. Originally released in 1985 by Cross Records, it delivers six fast tracks of ripping n thrashing hardcore.
Thats the short rant, now go get it @320. I don't know whats going on and some uploads are dead, this shit keeps happening. Some links were deleted without warning and its impossible to find it out, so when you see "The file link that you requested is not valid" just make a comment to fix it 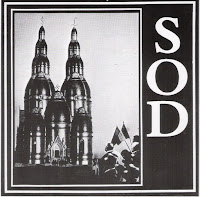 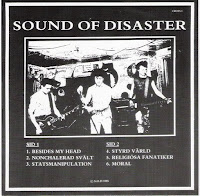 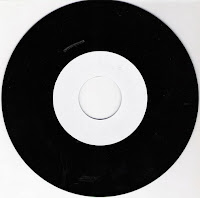 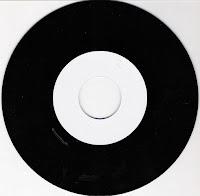 I have a random song from the Speak Swedish or Die record and was confused by that. Now I'm informed, and have more sweet hardcore. Thank you!

Great is the swedish punk. S.O.D is one of my favourites...

Toxik, i was more than sure that you are going comment here :)

Oh this is just excellent! Thanks Seveninch! :-)

Hi
The Anarchopunk News Blog just changed its design for a more DIY one!
Visit our web and vote in our little poll, even when the elections suck!

there's that demo from 1983 also, which includes the s.o.d. song covered by disclose on swedish feast...

thanks Slobby, i didn't know about the demo

hey mate. you can always make another ring if you lose the original one. the pizza box has the solid material for that matter.
just saying, if you didn´t know. :).

ps. this sod 7" is great man.
cheers from iceland.

the pizza box? oh i ve never thought it could work, thanks, :)

just got a bootleg of this... great record!!


check out this new band:
MENTAL RESCUE "STRAIGHTJACKET" DEMO 2009
RECORDED IN HULL,QUEBEC,CANADA APRIL 2009
THIS IS FAST AS FUCK RAGING HC.ALMOST CLEAN GUITARS ARE CONTRASTED BY DISTORTED BASS AND THE ULTRA FAST DRUMMING.THIS BAND FEATURES JO FROM GERM ATTAK AND CHANY FROM INEPSY.THIS FEATURES 16 TRACKS IN 15 MINUTES OF HARDCORE PUNK ALA PROTES BENGT,CAPITALIST ALIENATION,RIPCORD,SIEGE AND LARM.RAGE PUNK FOR MANIAX! CAPITALICIDE TAPES #11

Göran Lind, the singer of SOD frequently visited Sth Africa and started SOD sa togheter with Brett from Power Age, released some tracks on several tapes there (and a split lp?? on Power Noise Records). Have the original of this 7", bought it when it came out. Excellent record

To follow up on what Kjelli said re: South Africa's SOD (Surf Or Die, this time around), there were 3 split LPs on Power Noize (Powerage's lable): Split with Etilioppots (NL) '89, Split with Hoboken (another SA HC band; SOD's side is live) '90, and Split with Tribes Of The New Sun (?) c.'91. The last one is the only one I don't have, so I dunno much about it. They also did a 7" in '88 called "Rocking in Durban"...all this stuff was culled from 3 demos, recorded 1988-1991. Pretty good stuff, kinda messy, very SOA influenced. The 7"/first demo has some (Swedish) SOD songs redone with lyrics in English about 80's/Apartheid situation in SA, though! Woo!

One Of the best production of European hardcore!!!!! I really love that 7".