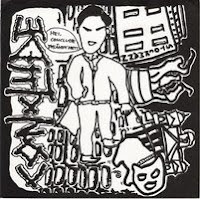 This is going to be short and delivers Finnish D-Beat raw punk: Conclude were from Japan, formed in 1994 and Made in Finland is their first and last vinyl release. They recorded a few demo tapes, they released some cd-r's and appeared in several compilations, they were influenced by the Finnish legends of 80's (Kaaos, Bastards, Terveet Kadet etc) and Japanese noise core. They toured in Europe in '97 and they called it quits around 1999, one of their members died in accident, check their Myspace for more details.
Made in Finland was their one and only vinyl release, it was recorded in autumn of 1999, it was released in 200o by the Tokyo based label F Oy Systeemi and delivers raw Finnish punk in the vein of Terveet Kadet. There are nine tracks here and each hardly lasts over a minute (record's length is 8:45"), the singer yells in Finnish, Japanese and English and the sound is raw and filthy.
According their myspace, Conclude are going to come back after a ten year break with a split 7".
There is no other shit to say, check their site and their discography, Slobby has an interview and their history in Distort Hackney zine, a copy can be found in this distro along with a few Conclude cd-r's 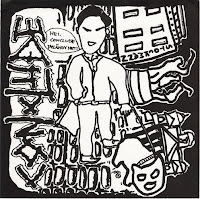 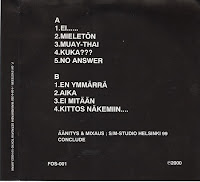 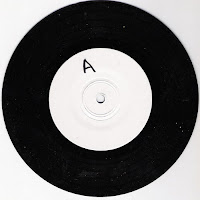 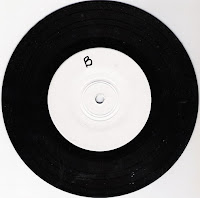 i thought conclude are a japanese band, not finnish.

Hi Paule
maybe you are right:their myspace says they were from Uusi Maa, Japan but a google search gives results for a city called Uuusimaa located somewhere in northern Finland..
http://en.wikipedia.org/wiki/Uusimaa
while a google search of Uusi Maa and Japan gives no results..
i really don't know, they probably were from Japan but not sure about it, (in their myspace the say they visited Europe (and not japan, i was confused at this point),maybe they consider Finland as their second homeland.
i hope someone who knows more will drop a line here...
thanks anyway
cheers

Here's a (very short) Conclude interview 2009 by yours truly:
http://distorthackney.blogspot.com/2005/02/conclude.html

Here's "the history of Conclude" taken from the Myspace with some additional rubbish thrown in by me:
http://distorthackney.blogspot.com/2006/02/history-of-conclude.html

As for the rest, yes Conclude are from Japan, Tokyo to be exact. And a 'lost Conclude recording' from late 1999s is due to be released as a limited one-sided 7" (I think) sometime this summer...not sure what more to add...

Hey-How To?
Tutorials for your blog! Rapidshare, Megaupload, Easyshare...

yes conclude were the first japanese band to play and sing finnish hardcore they recorded te 7'' while on tour in finland and i think some finland members were in the band at that point i think otto from forca macabra most likely. years back i had a distro and got some of these from conclude. i remember when i bought some wholesale for my distro there was a mention that said not for distribution in japan so i am guesssing most copies made it out of japan.
thanks for the great blog
ray ss

oh yeah i also still got some kaikki on paskaa cdrs i got from tehm for my distro too if you want one just send me some cash for postage or maybe a trade. i was never cut out for the distro life i was too lazy to table at shows and i didnt advertize so before i gave it up a few years ago i had some stuff just sitting for years even stuff that was getting rare and expensive on ebay but i am no business man and i have since given most of it a way to friends as presents. i had 5 copies of the conclude 7'' to start and i kept one for my self sold one and gave the rest to no fucker when they toured through my town, i just had my distro box out and they were like hey how much for these 7''s and i was like you are on tour just take em. that was fun.
ray ss

Hironobu Nakao was the one who released their ep. I traded with him (for Dust Noise too) roughly about the time the ep came out ('99?).

Hironobu doesn't seem to get any credit for helping to unintentionally spread the noisecore wave over here...so he'll ALWAYS get endless props from me.

Hi - I am certainly happy to discover this. cool job!