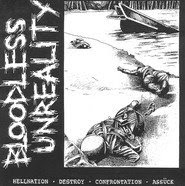 Can i make a question please? How would a compilation be bad when bands such as Destroy, Assuck, Confrontation and Hellnation are included and unleash their noise on vinyl surface? Well, in case like this, the question is simply rhetoric and the answer is there is no way a compilation like this to be bad...this is a masterpiece!
"Bloodless unreality" was released in 1992 by Forfeit Records, it was an anti-war compilation, the cover was an eight page booklet with lyrics and other infos, all tracks are lyrically related to aspects of war.
There s no much to say about the bands, Destroy are just awesome with two tracks of their grinding crust, Hellnation deliver two tracks too including "Politicians" of Raw Power. Confrontation were from Southern California, formed in late 80's and split in early 90's, their track is ok but comparing to "1989-demo" 7" or "Dead against the war" 7" the vocalist sounds tired and weak, Todd the bassist later went on with Dystopia. And finally Assuck finish the compilation with two grindcore blasts in their usual level of brutality. About ten minutes total running time of grindcore, thrashcore / powerviolence and grinding crust. There s nothing left to say, now go get it
Tracks:
01:Destroy-Vile horrendous aerial bombardement
02:Destroy-War without mercy
03:Hellnation-Politicians (Raw Power)
04:Hellnation-Death squads
05:Confrontation-Insurgence
06:Assuck-Procession
07:Assuck-Blindspot 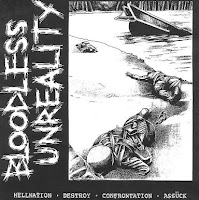 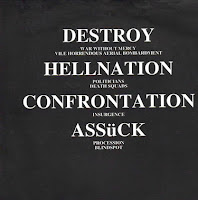 Always loved that Confrontation track... the creepy piano intro and the mid tempo pace really works well in my opinion. I thought the vocals were great - the singer comes off as exasperated by the end. Powerful. A great alternate version to the one on Dead Against the War.

Pretty much all four bands make me feel all warm and fuzzy inside. Nothing smart to add, really. Thanks!

I already own this 7" but thank you for the Confrontation links! This comp is the first i heard of them and I really liked their song.