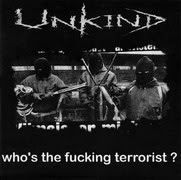 "Who's the fucking terrorist" is one of the early Unkind releases, these dudes started as Speedapple back in late 90's, there must be some demo recordings from 1998/99 and in 1998 they released their first (st) 7" on Witchhunt Records and one year later the split 7" w Police Bastard ((Fight Rec.s) and "Who's the..", they are still active and in 2007 they released "Hangen syliinch"cd, some members are in a band called Lahempana Loppua. check "Verinen ilotulitus" post for more details about their discography
All of you who downloaded "Verinen ilotulitus" and expect from "Who's the..." something in the same vein, you better forget the clean melodies and the whole Tragedy feeling:"Who's the..." is more straightforward rough crust having its roots in Finnish hardcore and 90's crust sound.The record delivers seven tracks (incl. one Kaaos cover), it came out in 1999 on Fight Records on black vinyl, 1000 copies were made and a limited number of copies was multicolored, the package is a fold out sleeve with poster and (to coin Whispy here) in "typical crust fashion" the track list printed on back cover is wrong
that's it. now go get it
Tracklist:
01:Black and green
02:Pohjanmaa
03:Vaihotehto (Kaaos cover)
04:Pet song
05:Think!
06:Revolution
07:H&M 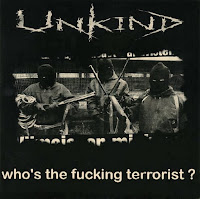 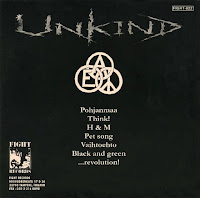