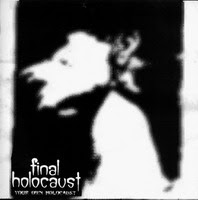 Before say anything about the band i feel i have to say something to some people who make comments here: Please, put nickname in your comments, it isn't hard and creates a virtual person to talk to, it helps the discussion and its annoying to see anonymous comments saying this and that and another visitor replying anonymously too. We will not enable any comment settings (code or author approval) and we leave it up to you people. :)

I don't know much about these guys so here is a few things i found in their myspace:They started in mid 90's as Slemäters and under that name they released a couple of demo tapes:"Slem åt folket","Kaos i kefir" and "Kärnvapenkrig", they contributed tracks in "Really Fast vol 9" comp (Really Fast Rec.s) and "I slaughter singing madly anthem" ep (1995,Devil in Hell Rec.s) then changed their name to F.H.
"Your own holocaust" came out on Distortion Records in 1996 and was band's only release as Final Holocaust (they also appeared in "Total frontkrock" comp.). The band delivers Swedish thrash, there was a version of orange vinyl, a girl on vocal duties but her voice sounds like a man growls. The guy who tortures the drum kit later joined Driller Killer
Check Slemäters myspace for some demo tracks, any help from people from Sweden on "Total frontkrock" comp or Slemäters demos or about the band in general is appreciated :)
Tracks:
01:Male oppression
02:Det ar mord
03:I want him dead
04:Take control
05:Look into my eyes
06:Time out
07:Fasciststat
08:Born to lose
09:Let it go 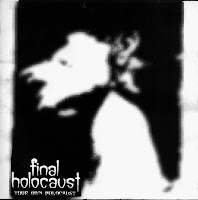 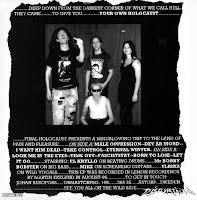 I'm from Sweden, but strangely i have never heard this band, wich is sad, because this was awesome!

i am too swedish and i remember slematers from the early 1990s when my friend and i had our crust fanzine; i think we considered the band "toy" (as it is called in the graffiti world) esp with the lame name (Snoteaters) that i think i saw as a bad homage to shiteaters...ha ha ha, jokes aside, sean has this on his blog: http://www.megaupload.com/?d=W0RUFHP3 (SLEMATERS '84 DEMO)

which surprises me as i though it was a youngish band who started in the 1990s.

clearly i have no idea. swedishpunk.com doesn't have anything either...

well, that's my 5 pences worth!

thanks Slobby, i checked Swedishpunk and Masken's Punk as Fuck before but there is nothing there ;/

Haha.
Hello.
this is the drummer. I can fully agree slemäters was so full of childish ploy shit. so we had to change bandname when we got tired of that. and -84 we were 8 and 9 years old, it must have been -94 or something, that demo...
anyway thanks for uploading this, we dont have to be ashamed of this ep i think, exept for the ultra-ugly cover.
oo yea I was so impressed to see that obvioulsy people has been visiting the slemäters-myspace, so I went ahead and constructed one for final holocaust too minsann. (myspace/finalholokaos)
I put up the compilation-songs there.
On a later occasion when im drinking beer by myself sometime i will improve the myspace site with little stories and so on.

thank you
I love your blog

hey dude, check out our blog, its common stuff, we're just trying to get some basics out there right now before we get more obscure, so you might not find much you dont have, but check it out and let us know what you think.

hello Johan
thanks for these little infos.
yeah, the artwork of 7" is a bit weird but the music is cool (and these comp. tracks on FH myspace are cool too),put some more stuff there. :)

Circle that H, i m not much into metal stuff anymore so i can't tell you if this or that band is cool or not, ill check Kaaos since i have seen in some sites mentioned as influence of Nuclear Winter
thanks anyway :)

Aha! Minsann ja ja. Great stuff! I knew that 1984 was a bit off the target! So was my Shiteaters reference, hahaha

Hello,
This is Micke, the guitarist from Final holocaust (FHC).

It's not strange that people hasn't heard about us as this record was recorded more or less right before we stopped playing and we never played more than a few gigs in and around our hometown.

The songs on Total Frontkrock (which you can listen to on myspace as Johan said above) was recorded before Ulrika joined us.

We have also put up "Eternal Winter" on myspace, it was a song that was meant to be on the EP, but we couldn't fit it in.

BTW, wasn't all the records in orange vinyl?

Hi Micke
thanks for the information,looks like Final Holocaust is the greatest unknown band of Sweden: you were cool band but Swedish sites do not know you.
about the orange vinyl:i checked Distortion's site but there is no any info about pressing,vinyl color etc, furthermore this seem to be out of print:there s no trace of Final Holocaust in their mailorder.
Eternal Winter is a nice song.
cheers