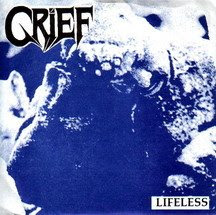 "I drown in my self-pity, don't need your sympathy
alone I wait for the end,I'm sick of seeing your fucking faces"
Actually, this post was going to be the Grief/13 split but since this was reissued in 2007 and its possible to find it around and i m bored as hell to check its availability lets throw in the Dystopia/Grief soundtrack of cutting your wrists.
Grief was formed back in 1990 by the former Disrupt members Randy Odierno (Drums),Jeff Hayward and Jay Stiles who wanted to follow a dark and doomy pathway much different to the raging crust of Disrupt. Their discography includes splits with some legends of sludge/doom such as Corrupted(1995), (1993) Soilent Green(1995) 13 and 16 (1998) and the "Depression"(a.k.a. st) ep 1992, the full lengths "Dismal" (1992), "Come to Grief" (1994), "Miserably Ever After" 1996, "Torso" (1998), "...And Man Will Become The Hunted(2000). in 2002 they disbanded due to "hostile environment for doom metal bands" and the same time released the "Turbulent Times" comp, they formed back in 2005 and in 2006 they released the "Alive"(southern Lord)
Grief had many line up changes, Jay Stiles very soon returned to raging crust fields and after State of Fear and Consume now is in a band call Disraid
Dystopia are the sludge/doom masters from Oakland, born from the ashes of Mindrot, Carcinogen and Confrontation they ruled in the fields of Doom and Sludge, recently they came back with their eponymous lp (2008,Life Is Abuse) and they still reign. Some Dystopia floating on blogosphere:Split w Suffering Luna(1995) Backstabber ep(1997), split w Skaven(1996), "The aftermath" comp (4 track EP/13 track CD)(1999,Life is Abuse)
The Grief/Dystopia (a.k.a. Lifeless/Sleep) was released by Life Is Abuse in co-operation with Misanthropic Records in 1993, it was the first Dystopia ever on Life is Abuse, it is long out of print and every single copy came with a free razor blade. According to Life is Abuse "though one distributor in Minneapolis took every razor outta all the copies we sold em cause they were afraid of getting sued". The Dystopia track appears in the Human=garbage comp cd (1994,Life is Abuse) and Grief tracks appear in "Turbulent times" comp.
Thats, it. I hope after all these links you have already clicked and you are in another webpage and not here, but if you are still here, go get it:
Dystopia:
01:Sleep
Grief:
01:Lifeless
02:Fucked upstairs 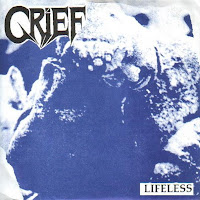 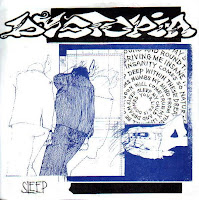 Hey!
This is really a great one! I wish I have the vinyl...eheh...I found it in a trade list but the guy who wanted to trade it suddenly disappered.
anyway great job!
cheers from Switzerland!

Great post. This is the ONE Dystopia record I don't own, you want to sell it to me. :P

its ok stig, get a a copy for free but no razor blade here :)

Killer post, the new dystopia fuckin rips for sure..

Wow - check this out
http://downmining.com/?s=grief

another idiot stealing not only the link but the entire post, next is to find a way to steal the comments too.
is not only the Grief/Dystopia post:all punk posts in this blog are stolen...

Wow - check this out
http://downmining.com/?s=grief

Okay, my crack legal team has done the research. Downmining is a fake blog hosted by an asshole who posts here on this forum trying to sell ad space on it (Check out Arunkamar 2006's url.)

You can write to the host of the downmining blog here and complain:

They wrote me back quickly and seemed to want to resolve the matter. The site is still up, but if more people contact the host perhaps they'll urge this fucktard to pull the site, or they will. This dicklicking ass candle has stolen my last 35 posts.

good stuff im adding you to my blog. thanks