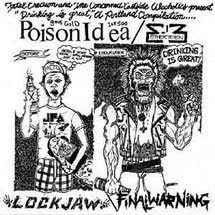 Here we are again but hwile we were away some serious shit happened:If you tried to download anything during the last days you probably noticed a problem, yes all links were dead, both servers Divshare and 4shared deleted the uploaded files and banned my accounts so things were really serious, the 90-95% of links were dead and only Whispy's links were still active. Due to its policy Div deleted all my files while 4shared activated back my account 24 hours later. Its quite strange two servers doing the same shit at the same time. I don't know if either 7inchcrust is victim of a bad circumstance or someone choose to complain there and not to make a comment here and ask about removing a(some) record(s) but whatever is the truth behind our conjecture, the fact is all the work done and uploaded in Div now has been lost. Its hard to re-up all these files,it will take weeks and months of hard work, some records were visitors fave's so these ep's will be up as soon as it is possible, for the rest we ll see. maybe some request reup's and for the rest only samples of one or two tracks. we ll see...
Anyway, we would like to celebrate the 200.000 visits with not such problems but thats life. We have reached the 200.000 visitors here and we want to thank all of you who visited, commented, downloaded, contributed and blah blah blah (the usual rant), now we head on for the 300.000 (hopefully) so lets have a drink and celebrate, cheerss!

"Drinking is great" is a compilation that came out in 1985 on Fatal Erection Records, a label run by Pig Champion (RIP) and Malcolm Conover. Fatal Erection released "Pick your king" and "Record collectors are pretentious assholes" of Poison Idea plus some ep's of Final Warning, E13, Osgood Slaughter and the Turbonegro/Flying Crap-split 10".
There' s no need to say anything about the kings of punk, so only a few words about the other bands: E13 (or Etherteen) were from Eugene, Oregon, they started in 1982 and released two ep's :"No mercy for swine" in 1984 and "Quest for Gilligan" in 1985, both on Fatal Erection. Damon Oliver their original vocalist died by liver disease in spring of 2006, you can find a brief biography of band, photos etc here. Members of E-13 formed Osgood Slaughter (1986/87) and released a 12" on (where else? ) Fatal Erection.
Lockjaw were from Portland and they were accused for being fascists. They selfreleased two ep's "Shock value"(1982) and "Dead friends" (1983). the E13 webpage labels them as neo-fascists but according to Kill From The Heart " Lockjaw was labeled "Portland's most hated band, they were ripped by the media, protested, and a couple of local record stores destroyed all the band's records. The band was accused of being nazis and white power racists, but it was all hysteria, rumor, and of course not true...", ... The record review of "Shock value" in Maximum Rock n Roll #3 states "Unfortunately the lyrics are really stupid, being sexist, violence prone and despite their protestations, racist as hell". A bunch of violent idiots i guess..
Final Warning were the old legends from Portland, the only release by them is their ep on Fatal Erection (1984, was re-released in 2008 by Black Water Records), they started in 1982 under the name Broken Trust and sometime they included Glenn Estes and Charlie Nims (aka Myrtle Tickner) who also played in Poison Idea. Members continued with Napalm Beach, Gruntruck, Zipgun and others, apart from Drinking is Great they appeared in "Northwest Hardcore" comp. tape (Media Blitz, 1988), in 2008 they formed back, you will find more details here
Tracks:
01:Poison Idea:Laughing boy
02:E-13:Pangreatitis
03:Lockjaw:You dick
04:Final Warning:I quit 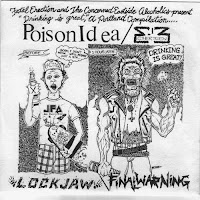 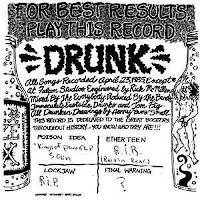 Ha. I used to live with a memeber of E13 and his drinking was not so great.

uhh, account deleted - that sucks! but I think it´s great that you continue and don´t throw in the towel!

about this comp.: it might interest you, that according to Kelly of Detestation LOCKJAW were racists and always ranted about foreigners, etc. at their gigs. I couldn´t believe it but he said that he wasn´t joking! sad cause their 2 7"es are awesome, but as I don´t think Kelly would lie it leaves a bitter taste!

Nice! Another great comp brimming with history! Thanks as always.

Also, congratulations on the good news, and I'm sorry to hear about the bad. Many of the records posted would never be heard by a great number of people if it weren't for this site. It sucks that someone is fucking with you, but at least 200,000 visitors (and I) appreciate what you're doing...

pope thanks for the infos, Lockjaw were scums..
about continuing the blog:we are not sure about the future of 7inchcrust, me and Whispy are going to have a meeting in a few days and decide what to do...

keep it going billy! and as I´ve d/l some of the files here I wouldn´t mind repacking and uploading them for you! I know how much work is behind every post! just drop me a line and I´ll try to figure out what files I could offer!

thanks pope,
i was thinking about adding new scans in some old posts and then this shit happened.
i have to discuss the whole thing with Whispy and together to decide about many matters (old posts,old links,bad luck,summertime boredom,etc.)
thanks anyway

You've nothing to discuss with me thouhg I'll be happy to discuss this nothing with you :). You made this blog into what is is, I'm less than a sidekick in this (& I'm happy to be that)! Meanwhile, I'm on vacation with my belle starting tomorrow after meeting some interesting crusties today :)!

200,000 is huge but not as huge as this site. Sorry to hear about the external storage woes. It is kind of like life where you come to rely on someone and then they fail you. I hope you continue doing what you are doing. Thanx for all you time and energy.

I think you should go on making new posts (of old stuff, lol) and only bother to re-up things on special requests by comment. I bet most of us would grab whatever is of interest as you make updates - as opposed to using 7inchcrust as a sort of database of crust records.

That said, I wonder if we could get some sort of "Blogs 3.0" scene happening via a shared server that hosts all uploads etc so we won't have to rely on external Fasthosts - I mean, this is what I ultimately want for PunksISHippies - all files stored on its own server...

but time? who's got it in surplus? Not me that's for sure! hahah

to clarify: i think you should continue the blog as usual, and repost old posts only as and when people explicitly ask for it...

I think you should continue! I've gotten some great stuff off this blog, and I'd hate to see it go. Continue forth!

As some people already said, just repost what people ask for and continue with the good work. You could just put a text explaining the dead links (something like "about 7inchcrust") somewhere on the top of the page where it would be visible for people who will come in the future and not see this post. Do not stop.
P.S. Nice thing with the new layout.

Continue please,this blog is such a good source for everybody on the net.

Final Warning were actually from Portland not Seattle. They released a great 4 song S/T 7" on Fatal Erection which is being repressed with a couple extra tracks on current PDX label Black Water. They're also supposed to be doing a reunion show in Portland soon.

keep it going! i know it's tough sometimes, but it's worth it!

as for old reposts, you should post a list of what was available, and go from there... just a thought.

The label is making a comback. And they just re-released these drinking is great shirts! I got one. Email malcolm through his fatal erection myspace to get one. And watch for fatalerection.com

E13 "sport pack" classic. Shitty but cheap beer came in 12 pacs with fish and game theme. East 13th st . House was a free for all. Break the sport packs on the floor and slam and grab smarm what you could. Drink...repeat.
Over thirty fugin years ago. great times and gash too.
T.V.