Iconoclast-Who does the freedom and equality exist for? 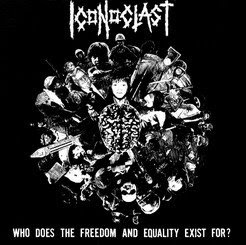 Someone made a comment about these crusties a few months ago asking infos about them and when i received this mail from Pete (cheers dude!) with this little gem i thought its ok to post it here.
These guys hail from Japan and they have not any relation with Iconoclast from USA
I know only a few about these guys:They first appeared with a demo tape in 1993 and one year later they contributed one song in"Under the cloudy sky - Kanazawa City HC" ep (MCR Company), in 1995 they released "Who does ..." ep and one year later they contributed two tracks in "Meaningful consolidation".
No much info on the web and the results in google search give nothing new, so if you know something about these guys don't hesitate to enlighten our darkness
"Who does the freedom.." was released by Blurred Records in 1995 with Iconoclast delivering five pieces of crusty D-beat japcore and the usual Japanese hoarse vocals. Icon Records (Iconoclast own label) is mentioned on the back cover, a co-release maybe with Blurred..Blurred rec.s is behind Senseless Apocalypse records, the Frigora/Diskonto split, Battle of Disarm/Snifter split, Nasum's World in Turmoil 7", Vivisection/Genocide SS split, Meaningful consolidation comp and many other 7"s
I ve nothing more to say here than this:This was the 200th post and is the result of a disagreement between me and Whispy ("you post the 200th" "no,you post it" etc),anyway, we hope you like it. cheers 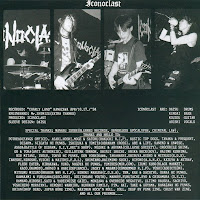 The singer for Iconoclast also sings for the Crow

Fuck yeah!!! I wanted to get this record when it came out...

would have been among my next posts but you were faster!a thing I never understood (and still not understand) is: if your english is not good enough to form a proper sentence why do you use it? to amuse people with brilliant titles like this one?

Your dear holliness, life would be so much more boring without japanese HC bands trying to express themselves in english...

Thank GAWD I finally get to hear this!

Thank GAWD I finally get to hear this!

Fckn' shit!! I have this record!! Really great!!

"The singer for Iconoclast also sings for the Crow"