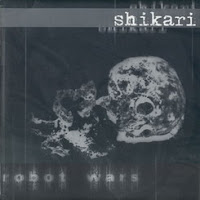 Ok, no need for much blah blah about this since the post of the st 7" has the bio and infos about the band. So only a few words about the record:
These eight tracks were recorded in February of 2000 in (were else?) Kuschelrock Studio in Bremen, Germany and were released in 10 inches in the December of 2000 by Deadlock Records. 1170 copies were pressed including a 6 page booklet, the artwork is in the vein of Bremen scene records and Shikari's neo-screamo crust is very close to Carol, Acme etc
The Deadlock site is down so i don't know if this is still available but these tracks are available in the mp3's of Bacteria since 2004.
Tracks:
1:Post student syndrome
2:Copycat
3:Robot wars
4:And just when i thought i had it all figured out
5:Written in some depressing mood
6:Encounters
7:You know so well
8:Fuel 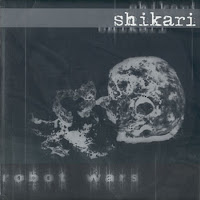 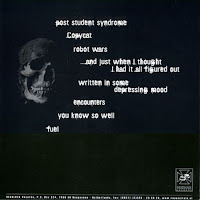 This is very far from being available... Has been out of print (in the 10" format) for years now. Awesome post!

az i thought so,i just wasn't sure :)
hey sabotage,where have you been all these months? thanks for the Faak Am See,these guys are ok,they are really good :)
Lolek Crust Bolek, thats the title! the cartoons! :)

ahh dont ask, much has happened, im thinking about starting a new blog, or starting the last one from the beginning with no posts.. give me a word of motivation :D anyways, im visiting your blog from time to time, and i really wanna thank you for your constant will and enthusiasm, really nice... dont stop :) do you have a lot of croatian bands? if i make a blog, im gonna put some cro records first... cheers!

c'mon man! start it again! and bring on stuff from the scene there.:)
and yeah, we keep going here and i hope Whisp will start posting some of his shit
i m afraid i have no any other cro record.and as for ex-yugoslavia,i have only this Nakot/Dyspnea split ep, Nakot come from Beograd
http://www.myspace.com/nakot99
see ya round, cheers

guess who is back :) check out my new first post... i decided to write about croatian bands first, just for you :) oh and i like Nakot, could you upload the split when u catch the time? cheers

Thanks for uploading these past two Shikari releases. Keep up the good work! :)

Shikari back in action? thats awesome! are they going to record any new songs or is just for some gigs?

Yeah, back in action! CMAR was amazing but we couldn't give it 100% because of the hellish HEAT. It'll take some time, but we WILL make up for it ;-)
BTW, thanks for sharing the 10" and 7", keep up the good work! Michael/Shikari

Hi Michael and thanks for the comment.
i wish you the best and soon to hear about new recordings :)
cheers

Did you know that you can make dollars by locking selected pages of your blog / website?
Simply open an account with AdWorkMedia and implement their Content Locking plug-in.