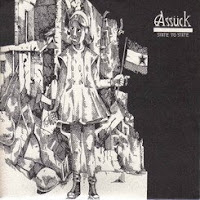 Another piece of grindcore from the St. Petersburg based maniacs released by the Italian SOA Records in 1993: Assuck's "Anticapital" lp was released by Sound Pollution in the winter of 1991/92, it was a 17 track old school grind armageddon, recorded in the (in)famous Morrisound studios in Tampa. One year later, State to state" came out in seven inches delivering four tracks taken from "Anticapital" plus a spoken word track
Nothing more to say here: Do not expect nothing but Assuck's usual grindcore inferno in side a while the entire side b delivers the spoken word track (and this background noise reminds of Chanel zero reality intro covered by Sore Throat..)
And don't forget Necrosalvation and Blindspot ep's.
Tracks:
1:State to state
2:The thousand mile stare
3:Procession
4:Epilogue
5:A nation's tear 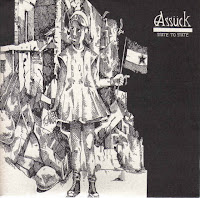 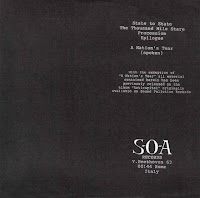 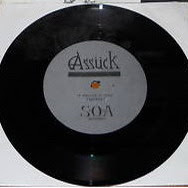 You suffer at Arena Special must be extended version:its 2 seconds long!
ahahahahhahah