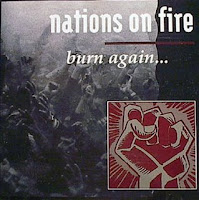 Nations on Fire were a hardcore band from Belgium active in early/mid 90's. I dont know much about these cats:Their discography as far as i know is:"Strike the match" (lp,X-Mist,91),a 12" vinyl version of their demos(lp,Stand as One Rec.s,91), "Burn again 2x7",Death of the Pro-lifer(lp,Genet,95) and "Ascenda da chama" released by a Brazilian label including "Strike The Match" & "Death Of The Pro-Lifer" LP's. They also contributed tracks in "Revive us again-The voices of inspiration of a machination world 7"(Machination Rec.s incl M.I.T.B, AG, Rupture, Excrement of War and others)) and "Land Of Greed... World Of Need" benefit comp(Watermark/Trustkill Rec.s).
NoF disbanded in 1994 and Edward Verhaeghe (vocals) formed Goodlife Recordings a major label in straight edge scene. Machination Rec.s released records of Acme,Fabric, Blindfold and others, it was a label run by Verhaeghe and a friend Jeroen Lauwers, bassplayer of NoF).
"Burn again" was released as double ep in 1992 by Strive/X-Mist and its a piece of hardcore full of energy, aggressive riffs, fast tempos, shouting vocals and lyrics on socio-political topics(i included a txt with the lyrical content). There was a limited number of colored wax copies and a cd version.
Tracklist:
1. On and on
2. Home for all
3. Slap it up
4. Escape from LA
5. Ecology
6. Four more reasons
7. Its manifest's destiny
8. Too much truth 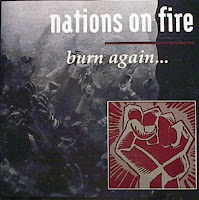 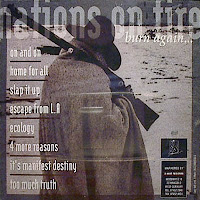 Nations On Fire was a great band! sXe, i believe, but great sound, politically aware, & important for the flemish scene. They were not affiliated with the H8000 scene either as far as i can tell, where they? Thanks!

Nations On Fire were great!!! Powerful political lyrics: great Euro-HC. Music not only for X-marked Guys, haha. I love their records !!!

Your discography is not correct :

plus numerous cuts on compilations,
way more than you mention here. the almost complete overview of compilation songs can be seen in the artwork of 'Death of' LP/CD !

NOF was clearly a political vegetarian straight edge band at the time, although not militantly, and well befriended with Crust masters like Hiatus, Chronic Disease, Private Jesus Detector, etc.

The band was very much connected with the H8000 scene in belgium. Hans who is the vocalist for the band LIAR even played bass with them on numerous occasions (having shared one band before ; first Belgium SXE band 'Rise Above' and Ed is the guy who came up with the H8000 name, and promoted nearly all the bands from that scene.

The original drummer in NOF is now in an international major label act Soulwax, and Ed is still running the Good Life label and mailorder :

To set things straight, Steve now of Soulwax never played drums for Nations Of Fire but for Rise Above and Chronic Disease (a band I did vocals for). NoF had 2 drummers in their existence: one guy from one man band Silent Water, the other from C.P.D. who also played with Disorder when he fled to Norway trying to escape military service. Vocalist for NoF was David from French band Scraps.

Great post, you always post the best stuff. I have been looking for this. i really appreciate it.

hey thanx you got a great site. good shit.

i have "Strike the Match", and i've always thought it was one of the better records from that time, but i had never heard any other NoF stuff. this ep rocks! thanks!

Would It Be Possible For You To Post The Rare Nations On Fire Live EP ?
That would be great. Best wishes for the worlds best blog !!!

thanks for your wish but i can't help you: i have never seen this live 7"....

Thanks so much for this 7 inch download! I have the record but my turntable isn't working so well.

Machination Rec.s was not run by edward verheaghe and a friend, it was run by the bassplayer of Nations On Fire! Called Jeroen Lauwers. He released bands like Acme, Fabric and so goes on...

i lost this record, anyone for sale?

Vik, thanks for the info and for correcting me.
keep your eye on ebay, maybe a copy will pop up some day....

I have this live EP, will post it sometime. Currently ripping the non smokers single, check soon my blogspot.