Fact/Disgusting Lies - No One Complains (split 7") 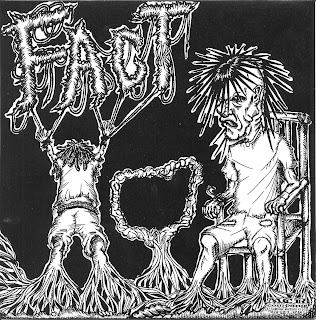 Next one up is the Fact/Disgusting Lies split 7" from 1999 released on the japanese label MCR Company. In a word, straight up crust onslaught from Disgusting Lies teamed up with japanese weirdness from Fact - just what the doctor prescribed, hopefully, until my crustious host gets over his computer problems.


Disgusting Lies are one of the better known polish crust bands & have been in existence since 1992. I won't repeat their bio here, since a detailed version of it can be found at their website, together with a discography of the band. Their sound is, to my ears, akin to that particular polish brand of crust: easily recognizable as such, but heavier & more brutal than most crust releases that tattered my ears to pieces (I'm thinking Filth Of Mankind in a more '90s way - that is, without the atmosphere and much more quick-paced). Grindy vocals - thankfully they provide a lyric sheet - in combination with a drummer that is not to be believed - either he is a fan of czech grindcore or he's been listening to a lot of metal. Strangely addictive - I get the feeling that I'll be damaging my speakers if I ever play this in 45rpm, however.

Fact is a band I know absolutely nothing about, as I've listened to very little japanese HC in my life. If you know something about them, please feel invited to post a comment! The only thing I can say for sure is that their side of the cover killed me on the spot, as did the little english present on the lyric sheet. (What is "Endress war tears a drop" supposed to mean? "All the cursed enemies are kiked fuckin!!" is even better, in fact - a real gem, for reasons that have to do with the particular misspelling in it...) As I already said, this is japanese weirdness (full with guitar soloing) - definitely worth your time. 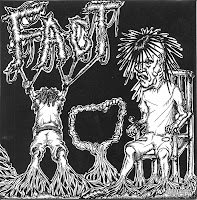 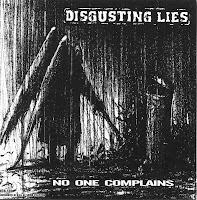 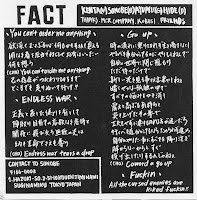 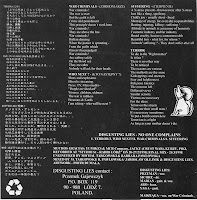 thanks for this dude, great work!
i love Fact's japanese "weirdness"(i m in love with Japanese crust & hc) and DL's side rocks! i don't know anything about Fact but i just found this report
about the polish scene and DL are mentioned there along with Wlochaty, Hostility, Homomilitia and a bunch of unknown to me bands
and yes, Hostility's link is to announce the re-opening of Crust-Demos to visitors, new posts will come very soon but infrequently i m afraid...
cheerz

Thanx for this one!
Never heard Fact before.
Hail to MCR!

Love that Japanese 'Hard Coar'!! LOVE. IT.!
Thanks

I used that link for 320kbps and here's what I got: "The file link that you requested is not valid"

its a problem with Whip's account, but 192 is active again, 320 will be up as soon is possible