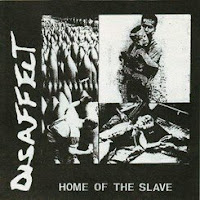 Disaffect were a hardcore band from Glasgow, Scotland, UK. They were formed in early 90's and disbanded in mid 90's. They released two lp's and three or four eps, there is also a discography cd. Actually, i don't know much about these guys, if you know more, please add some info..
This is the third pressing of Home of the slave. It was firstly released on Anonymous Records in 1993, the second pressing was on Uneasy Listening Records and came with different cover artwork and the third on Maximum Voice Productions. Powerful hardcore with female/male pissed vocals, aggressive riffs with nice breaks, fast and mid paced beat, good sound quality and gate fold cover with lyrics. Home of the slave tracks were included in the Discography cd on Anomymous/Panoptic Vision. Members of Disaffect and Sedition latter went on in Scatha 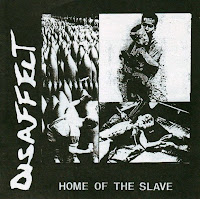 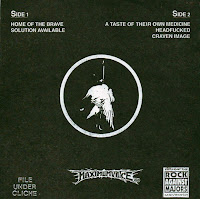 Yes!!! Finally someone posted some Disaffect. Thanks a lot!

Does anyone have the lyrics to any of the songs. I have the discography so any lyrics would help. Email= beaujangles13@hotmail.com

Joe (the male singer) runs this myspace I guess, and there's a short bio on the band and a couple pictures.

Great post!
I have the lyrics to most of their tracks in a booklet that came with the Powerless With A Guitar LP.
I'll try to scan a copy.