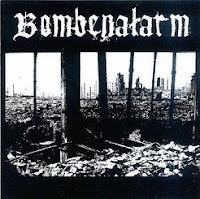 This is Bombenalarm from Germany and their first eponymous ep released in 2004 on Unsociable Records: Four tracks of dark crustcore influenced by scandinavian hardcore with some melodies on guitar works and heavy, harsh brutal vocals. Tempos vary from fast to midpaced and an insert with lyrics texts and translations in english is included. Lyrics deal with socio-politics as usual.
Well, this is a recent release and shouldn't be posted here, i dont know if there are still copies around (probably some copies should be available but i'm bit lazy today to search...),but before you accuse me take a trip in their web site: The band has on mp3 format every single track they have recorded until 2005's Buried alive lp. So if you like the ep, you can go there and download their demo tape, the 'Buried alive' lp(2005), the st ep (128 bitrate), one track from the 'Deutschland In Decline' comp. and their tracks from the split with Dean Dirg. Their discography includes also a split ep with Armageddon from Brazil and the 2007 release No mistakes lp. Ah, i almost forgot it: Bombenalarm are involved with Burial and Doomtown..
Enjoy it:
http://www.destroy-division.de/bombenalarm/
Tracklist:
01. Destination fucked up
02. Identifikatorisch versagt
03. Zero existence
04. Ziel funktion 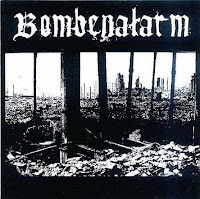 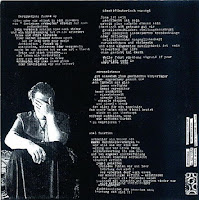 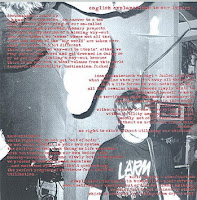 Hi - interesting blog...
I just wanted to let you know: in your WANTS list, you have a demo called 'Punk is a Rotting Corpse' by Napalm Death...there is no such demo - it is a myth spread by the internet...I thought I would let you know as I wouldn't want you wasting your time looking for something that doesn't exist...
If you go to the Napalm Death discography on Wikipedia, you can find info on the actual demos, which I added a while back...
Take care,
Nic

sorry that i upload here this question but i dont know where i post it...anyway, i search for LAST RITES from scotland, WE DON'T CARE 7" (Flicknife, 1983)and FASCISM MEANS WAR 7" (Essential, 1984)can anyone upload them? thanks, nice blog mate!

thanks Nic this demo seems to be a ghost..it appears nowhere as 10 track tape. there's a 4 track tape in trade lists but its fake, actually 2 tracks are not ND,
sorry dib, i dont have any Last Rites record, try 7inchpunk forum or Erich's Goodbadmusic, there r a lot of obscure records there or maybe Erich knowns more about

Yeah, it is a ghost: a rumour whispered around the Internet that became fact!
The same applies to the other demo you mention - it only has one track by ND (the track from the Crass compilation), and the rest are by some other group...
I may release a vinyl sampler of the first 4 Napalm Death demos at some point in the future, so keep watching the skies!
Nic

yes i ve heard it that one track or two were original ND tracks and one track was their contribution to Crass comp.
a ND-demo on vinyl sounds great.may i ask you something? are you somehow connected with the early ND history? (dont know why, this is stuck on my mind..)

i knew it! you are the man i had in my mind, i don't know why but it was you! :). Nice to see you here Nic and thanks for making things clear about this "ghost" demo. :)

Vinyl sampler of the first 4 Napalm Death demos - I'd love to have that.