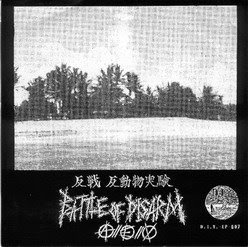 Fleas and Lice from Nethrlands was born from the ashes of Mushroom Attack in early 90's. They have released several ep's and lp's, they have sociopolitical lyrics with a sense of humor(including some songs about drinking..),they also have funny covers and all these make their crusty punk stay away from the "dark crust", a term that describes most of crust bands nowadays...
We have meat Battle of Disarm from Japan in "In the war" ep here. Political punks, activists with strong messages about anti-war and animal rights
The FaL/BoD split was released on D.I.Y. Records in 1995 and 1000 copies were pressed. FaL contribute two tracks with dual(male/female) vocals, fast tempos and a punky crust feeling.
BoD offer two angry tracks of their Japanese hardcore with pissed vocals, political lyrics, fast tempos with the exception of an acoustic intro with some spoken word by Ryuji Asada.
The record was selfreleased, D.I.Y. Records is the label of Battle of Disarm
Tracklist:
Battle of Disarm side:
1. Science have taken our health
2. Think
Fleas and Lice side:
3. Fleas and Lice
4. Enough is enough 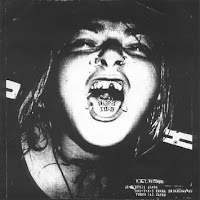 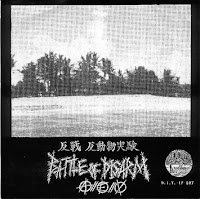 Right on! I had no idea these bands did a split. Thanks for this. I just discovered your site, and I am very happy to have done so. I have linked you to my blog. If you like, feel free to do the same!

Hi batguano and welcome to blog world. i have already added you

didn´t know that this split 7" existed but what I do know through personal expierence is that fleas & lies are fucking idiots! I´ve uploaded some other B.O.D. splits on AM I MEAN!
cheers!
p.s.: I love your blog!

wow! a great BoD tribute on AM I MEAN! thanks pap Benedikt. bring on the demo!!!! Amen!

The 7" I've been on the hunt for is the split w/ KATASTROFIALUE. Got it? Also, what's your e-mail? I ripped a DISRUPT split and you can probably write it up better than I can.

daniel i got no any split with Katastrofialue...sorry..
if you ripped the Disrupt split then you should post it on Distort Truth Distort Minds, it doesn't matter the way someone writes, just write what you feel, its only music. actually i think my writings sucks all the time. anyway, if you still want me to post it the mail is 7inchcrust at gmail dot com

you only think your writing sucks all the time because you've got low self esteem :P - your writing is as good as anyone's.

daniel, have you checked whether the katastrofialue tracks from the split w/ BoD are in their semi-discography (the one that came in that dvd case - google for it)? I don't have the split either... & i'm very intereted in the split w/ Brainstorm, too... (sigh)

i got the split split w/ Brainstorm but if you want it you gotta pay all the beers we 'll drink together! hahahahahah!!!
..low self esteem.. i need a drink right now...:)

I have the CD laying somewhere I can't remember if it got lost or what. This post just reminded me of it, I've never heard the BOD tracks from it though.

I don't think my write-ups are horrible or anything Haha. I just figured since there are a few DISRUPT splits on 7inchcrust the usual visitors would have an idea of what they're getting. I'd like to help add on to the site is all. E-mailed it!

I did it! the BATTLE OF DISARM demo is ready to download on AM I MEAN? AMEN

*)daniel i just got the e-mail, downloading right now. i said that before because you said i can probably write it up better...anyway,its ok, thanks,i have to re-upload the split now because sendspace has limited number of slots in some countries.
thanks again, solidarity and helping each other makes great a blogger :)
*)the holy man of blogs just did it! thanks benedikt xvi, blame me once again! i am a sinner! :)

maybe if I´m in a good mood I´ll spare you from your sins! AMEN

Lots of Missbrukarna on my blog now, of interest to all who like old good crispy early Swedish crust in vein of Mob 47 et all. Sorry for the self-aggrandazing plug! Fleas & Lice RULEEEE! Lol.

@7inchcrust
i know this post is from two years ago, but i see that you have Battle of Disarm split LP with Brainstorm. i played in brainstorm at that time, but lost all of my copies in any form. it would be great if you could post a link.