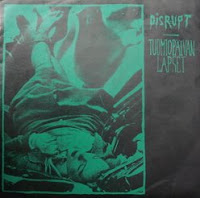 This is Disrupt/Tuomiopaivan Lapset Split 7", released on Ecocentric Records in 1992. Disrupt need no introduction: Once again, they walk in their familiar territory of noisy and grinding crustcore with raging guitars,bursting drums and distorted vocals, offering three tracks of manic crust.
Tuomiopäivän Lapset contribute four tracks of dis-core with angry shouting vocals singing in Finnish, d-beat feeling and bashing drums. They were from Tornio, Finland, they formed in early 90's and were active for about a decade, their discography includes a bunch of ep's,some of them are posthumous releases (they called in quits in 1998), there is a 59 track double LP including their discography, it was released by Power it up (and can be found here).
The Disrupt tracks are included in the "the Rest-2CD" compand in Discog CD of Dead Alive Rec.s.
Thanks and credits go to Daniel of Distort Truth,Distort Minds who ripped the vinyl and scanned the covers. D you are cool :). thanks!
Tracklist:
Disrupt side:
1. Equilize
2. Crock o Christian
3. Try my trust
Tuomiopäivän Lapset side:
1. Väkivaltaa & sortoa
2. Sikakoirat
3. Mustat liput
4. Rauhan aika 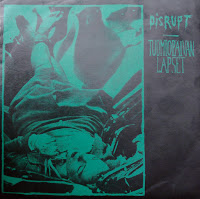 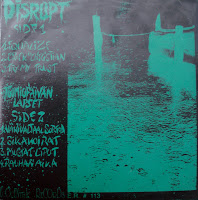 should´ve send you the BoD demo for your crust-demo-blog! need the DISRUPT demo? AMEN

One of the my favorite bands from the 90's is Disrupt, Really thanx for upload this record. This is really complicated to find. If you have another studio 7" split from disrupt will be good uploading that too. cheers, thanx and take care!

i was hanging around in your blog and i got lost there.. :) you have posted so many great records lately.. :)
no its ok about the BoD demo. maybe i will use it in a later post(and of curse noticing the origin).i wish i had never started the crust demo blog, it takes you so much time to handle two blogs,but since you start it, you dont wanna stop it. (i got ideas for more blogs but no free time..), anyway,if you want to send the Disrupt demo,its ok!thanks! :)

i cant resist the temptation after listening Ja basta! from Abuso Sonoro, so the Revolte se 7" is on the way :)

Thanks Jonnhy but the whole work was done by daniel of Distort Truth,Distort Minds blog :)

I know what you mean! I wanted to do a 2nd blog for the bavarian stuff but my girlfriend, err ah, just kidding, I´m the pope so no girls for me, god got pretty angry about the idea! costs to much time that I could use better, e.g. for excommunicating some fuckheads! go ahead, bring the revolte se 7"!where should I send the disrupt demo to? AMEN

just upload it somewhere and put the link here in a comment...or send a mail(u 'll find it the comments in the BoD/FaL post)or just post it on your blog...
thanks :)

ok! you´ll either get a mail or I`ll put the link in a comment! you know I´m thinking of uploading some videos like hellnation or los crudos or the whirlwind hardcore video (does anyone remember?) but this would take a lot of time and I´m busy with preaching! AMEN

do you mean in your wanted list you want the rehersal demo vinyl ep from terrorizer 1987?

yes, this is it! thanks Chris!