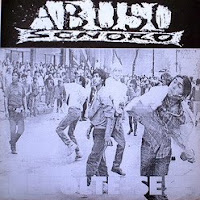 We are back in South America with a band this time singing in portugese and not spanish. The brazilians Abuso Sonoro released Revolte se ep in 1997 on Sin Fronteras and it includes tracks that were previously contributed in compilations.
So, here we got brutal hardcore with harse throatty and some screaming vocals, lyrics full of wrath, angry guitar riffs, fast and midpaced tempos while the sound is raw and rough. An insert is included with lyrics and translation in english as well, some texts presenting the band's ideals but there are no details where these tracks come from. The first track is about the revolt in Carandiru, the biggest penitentiry complex in South America, a revolt that ended up with over a hundred dead and hundreds injured inmates, Check Sepultura-Manifest lyrics from Chaos A.D. lp for more about what happened there in 1992...
Tracklist:
1. Abuso de poder
2. Disrtuir
3. Opcao
4. Enganados
5. Buraco podre
6. Justica sega 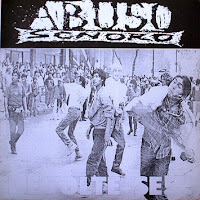 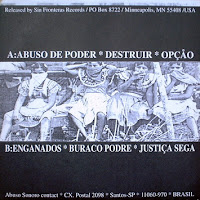 There is even a movie about Carandiru. Nice rec!

could you please re-upload this 7"

making anonymously a request,is not arequest at all..