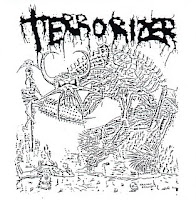 This is a classic piece of noise: Here we have some Terrorizer's old demo recordings from April of 1987, released in 1991 on seven inch vinyl limited to 333 hand numbered copies. This rarity was released by Satanic Records(Japan) in 1991 and the Filth Records label wich mentioned on the back cover was probably the label that released the demo tape. There was a green and a red vinyl version, there are four tracks here delivering Terorrizer's devastating death metal, the B side track list on back cover is wrong, if you listen carefully beneath the surface of horrible noise you will understand that "Corporate Takeover" and "Misled System" are "Human Prey" and "Resurrection". Tracks are in the original form without any remixing work, the sound quality is on the level of demo tape recordings of 80's but the value of this there isn't in the sound quality, right?. This is rough and raw and the wall of sound made by Sandoval's drumming just kicks asses. Just to mention here that the cover artwork was made by a guy named Killian Ryan (thanks Alan and cheers!).
You all know Terrorizer, don't you? check the back cover for a brief history of the band and some more details about this ep. There is this unofficial Terrorizer site but a lot of information in their record catalogi's missing, even some tracks lists might be wrong, all tracks that appear in this bootleg are not listed in 4/25/ 1987 rehearsal tape despite the boot tracks come from this session
This record was a sweet finding, thanks to Chris of Crustcracker for this.
Tracklist:
1. Strategic warheads
2. After world obliteration
3. Corporate take over
4. Misled system 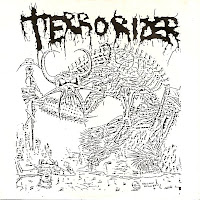 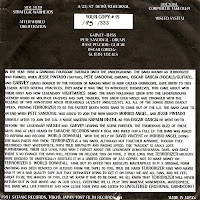 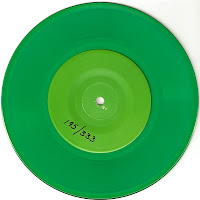 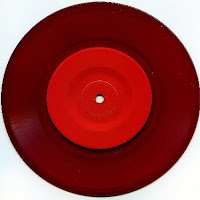 Fuck, man! I've been looking for this forever!! Check out my blog, dude.

did this bring back memories or what! i remember byuing morbid angel's 'abominations of desolation' - on satanic records, of course! - back in '93/'94. its price was 3-4 times the price of a diy punk record at the time (ouch...) & it remains, to this day, one of the (luckily few) records i spent a large amount of money on. (& i didn't even like it - dammit!) thanks for the blast from the past!!!

actually, this boot came from mexico .....

Thanks for the blast from the past here. I am unable to convert my audio tapes YET, so things like this from back in my day are a treasure to see in digital form.

I cannot help but notice the name Killian Ryan on the cover art, he was one of my old pen pals back in the 80's - and I am still searching to see whatever became of him.

Maybe someone reading this knows? Who knows?

Cheers for the doss with this, I can scratch it off the 'to do' list whenever I can find an ION deck or something similar in this country.