Vicious Circle-Search for the solution 7" 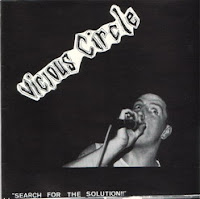 Vicious Circle were a hardcore band from Melbourne, Australia, They were formed in mid 80's and became one of the leader bands of Reactor Records. Circle of the Doomed demo tape was their first recorded material and was followed by 'Search for the solution' ep.
Search for the solution 7" was released in 1985, this a great debut ep, strong influenced by 80's UK hardcore, First pressing 1000 copies,second:1000 and third:500 copies. Here they deliver powerful fast hardcore and sometimes they bring in mind Abrasive Wheels from the When the punks go marching in era (Claws of death sounds like Abrasive Wheels track)
Search for the solution was followed by 'Price of progress' lp and split lp's with the Aussie punx Perdition and Youth Brigade from the States. A few more releases (incl. 'A nightmare so quick' 7" in 1986) saw the light of day and around '90 the band called it quit. They formed back in 1995 and released a few more records.
Most of their releases in the early days were released by Reactor. A detailed biography can be found in Kill From The Heart
artwork was found here
Tracklist:
1. Vicious circle
2. Personality crisis
3. Trapped
4. Claws of death
5. Corporate death scheme 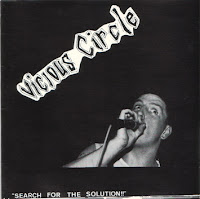 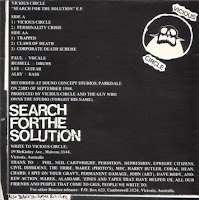