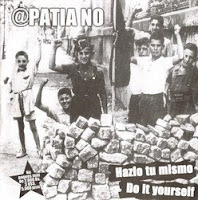 Lets throw some Spanish speaking bands in here as it was requested, starting by the political anarchopunks @patia No from Venezuela: They have released several ep's, tapes and lp's since they started back in 1994, check their discography here:. Hazlo tu mismo(Do it your self) was released on Noseke Records and Bajo Perfil(a label from Medellin, Colombia) in 1999, 1100 copies were pressed and was re-released on color vinyl and different cover in 2003 including 2 @patia No tracks from the split 7" with Sentimiedos Oprimidios from Argentina
Here we got a raw attack of south American anarchopunk with harse dual vocals,(male vs female vocals ,the deep low brutal grows come out from girl's lugs), political lyrics (in Spanish), raw guitars, fast and slower tempos and nice drums fills. 7:30 minutes total running time, four tracks including a song about do it yourself ethic and ideals. Nice artwork (are these pics from Spanish civil war?), raw but descent sound production for the anarcgo-hardcore genre, this rocks!
Sin Dios request: i dont have to post anything from these legends because if you get here you can download their discography. For more spanish speaking bands check Ioriska blog , DIY or die blog, Descarga HC Punk blog, Ruidos Massacrantes blog and Destruyanlos a todos blog
Tracklist:
1. Confundido
2. Politica electoral
3. Donde esta
4. Hazlo tu mismo 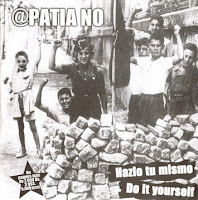 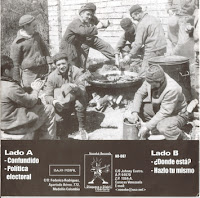 I have bought some great records recently by bands from Central and South America. Apatia-no are super, I also like in particular Polikarpa Y sus Viciosas

Yo dude, I just started a blog dedicated to Spanish heavy music. Ranging from crust to black metal. (more crust) I'm going to post a link to your blog because it rules. Here's mine: