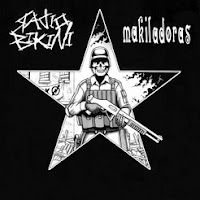 Two Dutch bands in an amazing ep released on a co-operation of many labels in 2004. Makiladoras formed in 1999 in Hoogeveen, by former members of Venders of Smut. In 2003 they released Niemand Weet Wat De Toekomst Brengt 10" and one year later this split saw the light of day. In Eigen Hand 12" was their final release (there is also the posthumous lp called Niemandsland plus some discog cd's,
Radio were from Limboland, i don't know anythting about them,one thing 's for sure: they had another split 7" (shame on me, i can't remember the other band), that was supposed to buy from a local distro but i came there too late as usual and all copies were sold

Makiladoras offer two tracks of heavy fast metal edged crust with many influences from the Swedish death metal scene (Dismember etc). Radio Bikini contribute four tracks of speedy scandi crust and screaming vocals. The side of Makiladoras wins as they are closer to my taste. Cover was made by Marald, 1000 copies were pressed, a booklet with lyrics and artwork was included.
Labels thet co-operated here:UPS (nl), DP(or not DP)(nl), Toffu Guerilla(ger), Svaveldioxid (lux), Squawk (fr) and Trabuc (sp)
read a review here
Tracklist
Makiladoras side:
1. Rekenmeester
2. Uitschot
Radio side
1. At your service
2. Geruimd staat netjes
3. Inhale you sucker
4. Vooruitgang is acheruitgang 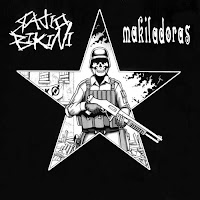 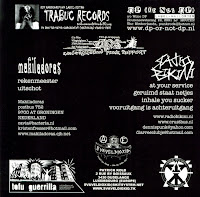 Yes, well, Makiladoras come from Groningen (what a scene!), while Radio Bikini were the only political band from Eindhoven in "recent" years i can think of right now - no wonder the Groningen side whoops the ass of the Eindhoven side! Great post dude!

The other split 7" of radio bikini was with an anarcho straight edge band from Brazil called xamorx. I got this for free from one of the dudes that played in radio bikini. Great stuff!
I do think this is available in some distros, just google it.

Hi Serpent, i apologize for being too late to reply, no much free time lately and the comment section is not working all time. Anyway, the link was removed long time ago and recently was re-activated. this is out of print in DP(or not DP)and Svaveldioxid but Tofu and Trabuc have copies of it and some other distros as well. link is removed, thank for reporting it.