Here's is a little gem including two of the most important bands of Swedish scene: Disfear and Uncurbed teamed up for this split which was released by the german label Lost And Found Records in 1993 in only 500 (?) copies and as expected is long out of print. There is no need to say anything about the bands, each of them delivers one song, Strike of mankind of Uncurbed was taken from the cd with the same title while Masslakt (mass slaughter) of Disfear was a new song. Both bands bring powerful, raw and aggressive Swedish hardcore, the record is too sort, it lasts only four minutes (wish there were more songs here) and it looks like a tour ep (the bands toured together in Germany but it was in 1995 not in '93..) or a bootleg (poor photocopied cover, blank labels), futhermore Discogs says "Most of Lost and Found releases are bootlegs" but then Uncurbed list the split as an official release in their discography, anyway if you know anything about that just drop some lines.
Recently Uncurbed called it a day after twenty years of activity, the split w Warvictims was their swan song. Members are already in other acts such as Demonical, Irritation, Interment, Kol & Stål, Entropi and Regurgitate. Disfear keep going on. 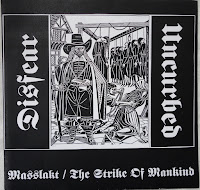 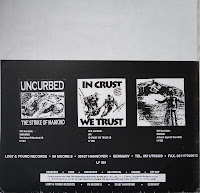 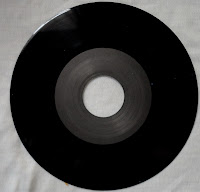 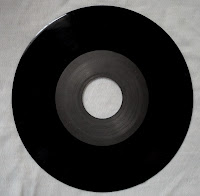 A lot of Lost and Found releases were bootlegs, in particular the old US hardcore releases. Some of the newer ones were bootlegged as well, I remember reading Dwid from Integrity was going to track the guy down when he was in Germany. A lot of other bands tended to have their demos bootlegged, ofen the first they knew of it was when a CD appeared in stores. Some of the most recent bands appeared to be legit releases though, such as Battery, Ryker's and Ignite.

The Disfear and Uncurbed releases appear to be legit. As well as this L&F released the A Brutal Sight of War by Disfear and The Strike Of Mankind and Mental Disorder CDs by Uncurbed, all of which appear to be accepted as official releases by the bands.

thanks for the comments and the information

L&F was started as a distro by Bernd Granz and another guy who both were/are collector nerds of the highest degree and in the beginning the label was more or less just a spin off from the distro that was supposed to do re-issues of old & o.o.p. records only if I'm not mistaken.
after they re-issued some real gems like HERESY, STRAWDOGS, DEATHWISH, FU's, etc. on vinyl in the labels early days (with really poor packaging) they unfortunately started to put out unreleased recordings of old bands too and from there it didn't take long till they switched from vinyl to CDs and from unreleased and o.o.p. stuff of old bands to new releases of new bands releasing some of the most embarrassing shit in the history of music during the process.
in spite of the fact that it's true that a lot of people found out their band released something on L&F not earlier then when they found it in a store all the releases that have the L&F logo on them weren't bootlegs which doesn't mean all of them are legit though.
but honestly speaking I even think that L&F did way more legit releases than the gossip and rumors leads you to believe. I'd bet my bottom dollar that a lot of the people/bands that claim L&F bootleged their stuff and they had absolutely no idea that L&F would re-issue their stuff lie.
some of them were more than happy to sell the rights to Bernd when he offered them a few bucks and were just pissed off when they realized they sold them to cheap others got fucked over by their former band-mates and some just got tricked into signing a contract they didn't understand.
don't get me wrong there's no doubt that L&F did a lot of sketchy things and I'm also quite sure they fucked over a lot of people/bands but to quote homer simpson: "it takes 2 to lie. one that sells the lie and one that buys it!"
on a side note: there was a piece in a big german newspaper that said UNCURBED got signed to L&F cause they sold 300.000 copies of their demo