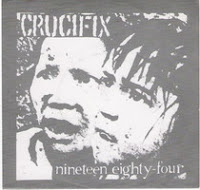 You all know Crucifix and you all know Nineteen Eighty Four 7", don't you? here you got their heritage to the seven inch vinyl world: This was originally released in 1982 by Freak Records and was the follow up to eponymous 12 inch ep from 1981 and was followed by Dehumanization lp from 1983. These three diamonds along with the split w Patareni and Exhibit A lp comp. are Crucifix legacy and we shouldn't forget the contribution of Annihilation in the legendary No So Quiet On The Western Front 2LP . Here you got an unofficial re-issue from 1992 on War Crime Records from Switzerland and came out in only 500 copies. According to a Bacteria trade list from 2009 which includes a (numbered) copy of this boot there were 800 copies made but since there is not any numbering on my copy this must be another bootleg.
War Crimes brought this in the same artwork, what is different is the vinyl labels and instead of peace symbol and Freak Records badge there is the picture of front cover printed on labels (and of curse the Freak Records badge on back cover is gone), inner sleeve artwork is exactly the same and brings you the lyrics. Prejudice, Steelcase Enclosure and Rise and Fall are the three tracks of ep recorded live "in the studio at Tom Mallon's And Rythmic Rivers S.F. 1982" and as Discogs says the original copy included a patch, back cover print says Steelcase Enclosure is B1 track but Rise and Fall is the first song on side B .
Some Crucifix interviews can be found in Suburban Voice #6 (1983) and Ripper zine #2 (1982), some more infos about them can be found in Wikipedia, no need to say anything else,go get it 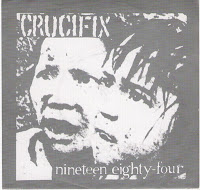 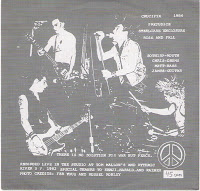 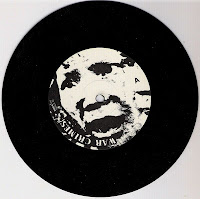 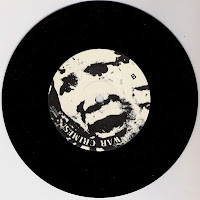 Thanks so much. A band I've been meaning to check out for the longest time.

Your site is just tremendous! Please write more as soon as possible.

Another one of my favorites!