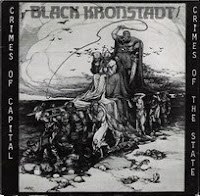 Black Kronstadt formed in early 90's in Victoria, British Columbia, Canada and called it a day in mid '90's, their legacy is Crimes of Capital... 7", A world to Win 7", Free Spirit lp and a contribution in Retrogression #10 but what is important and their real heritage is the fact that they were the founders of what was later to become Blackened Crust, a sub-genre that was developed by Iskra, the band that arose from the ashes of Black Kronstadt. (Iskra members are involved with Skagos, Leper, Corrodead and others)
Crimes of Capital... was released in 1992 by Hierarkill Records (band's own label), the package is awesome, the record comes in poster shaped sleeve with amazing cover artwork, lyrics, explanations, special thanks and texts about topics related with the lyrics: the other side of foldout becomes poster and includes some artwork and small-letter font writings (just like Sludge and Lettuce) about Zapatistas and ELZN, a sheet with some poetry is included. Music wise this is powerful hardcore with shouted vocals and guitar riffs influenced by Discharge, Conflict, Chaos UK and the likes, (the Blackened Crust seeds started to grow a few years latter in A World to Win 7" before take their complete form in the intense guitar riffs and screamed vocals of Iskra) and as expected for a band named after the city that is synonymous with the rebellion that became the last cry and hope for freedom in Lenin's Soviet Union (read Ida Mett's book and check youtube for some old videos), lyric wise each track is a strong political statement, the first song "Tragedy" is about the desperate 12 day revolt and struggle in Barcelona in 1909, well written lyrics and interesting enough to make you sit down and read.
No more useless rant, there are two links, the first for the tracks and the second with the high resolution scans, check also A world to win (full scans too) 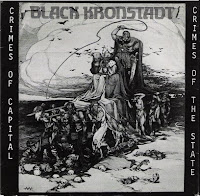 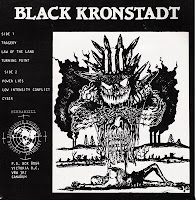 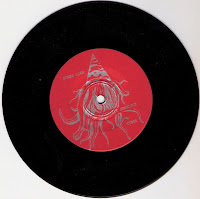 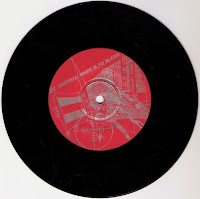 another classic!!!
i have buyed a world to win in the age of 14 and i thought that was awful. by the years became one of my favourite 7''. thanx

Thanks alot for posting the scans with this. This is the only Black Kronstadt album I don't have on vinyl so I've never had the chance to see the lyrics until now. Cheers

thanks for the comment Mr Anonymous,i guess this is the first time Crimes.. scans appear on the web

this is a great site. I've not heard a lot of this stuff or not for over a decade, thanx for all the work you put into it. >>I didn't know BK had an album out, but about ten years ago I heard Atom Nuclei on the Iron Columns 2xLP and was very touched by the poem that precedes the raging song. great stuff!