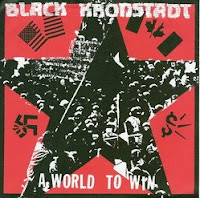 Black Kronstadt were from Victoria, British Columbia, Canada, formed in 1992 and broke up in 1997. They released two ep's ("Crimes of capital,crimes of the state" and "A world to win") and a full length ("Free spirit"). They started as a raw Anarcho-hardcore band in the vein of Discharge, Chaos UK and the likes with strong political stance and lyrics but in this 7" their sound is crunchy, heavier and more in the crust fields, when BK called a day members formed Iskra and developed what started in this record by adding more black metal elements and became known as Blackened Crust: A powerful blending of anarchist lyrics with black metal direction in music with noodley guitars and hoarse screamed shouting. In A World to Win Black Kronstadt made the step into crust/black metal fields and left behind the anarchopunk direction of Crimes of Capital, some hints of the past appear (Antifa) and sometimes they are more crustie. There are three tracks of under-produced noisy and sometimes chaotic crust with political lyrics and screamed shouting vocals: Last supper delivers heavy midpaced crust, All cyst΄ms down has some catchy moments while Antifa is more punky and reminds their previous ep. As conclusion the record stands between Crimes of Capital and Crust genre, the cover folds out into three parts with lyrics and texts about Mumia Abu-Jamal, NAFTA,GATT and the global capitalistic greed. A small sized eight page booklet with poetry was included. Released on Consensus Reality, 1995
infos:
Tracklist:
1. Last supper
2. All cyst΄ms down
3. Antifa 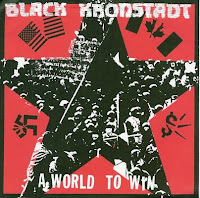 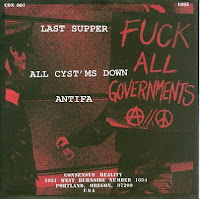 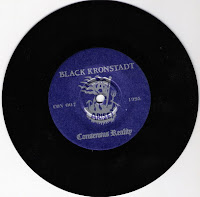 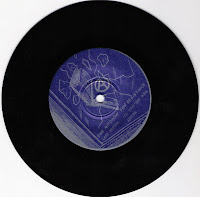 no worries dude!there must be some server updating or problem or something, this shit happens some times, be patient and try latter :)

coaccion, disabuse, yack.. have you got any of that?

no i haven't got any of these bands, sorry...