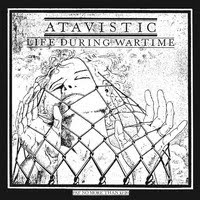 Atavistic formed in Whitstable, Kent, England in mid 80's and their first recorded material was From the Within demo tape. They released two ep's,"Equibrium" (Looney Tunes Records), "Life During Wartime", both in 1987 and "Vanishing Point" lp (in 1990 on Profane Existence, there is an alternative version on Deaf Records), they also appeared in Peaceville's "A Vile Peace" compl. lp.(1987), in "Twenty Years On- The Summer Of Love?" (1987,Pampers Für Alle! Productions) and "Hiatus" lp (1988, Peaceville)
Life During Wartime was released by Peaceville and delivers four tracks that balance between hardcore and crust. Vocals are rough and angry, guitars are thick and heavy while drums have some outbreaks that built a wall of noise and combined with the raw vox and guitar sound lead the band near to grind fields
This is pretty rare, no more than 1000 copies must have been made,(the exact number must be somewhere between 500-1000) and it came in fold out cover including lyrics and texts.Three years later Atavistic released "Vanishing point" but compared to their ep's it was a bit let down and bored stuff. 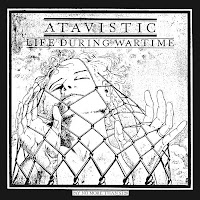 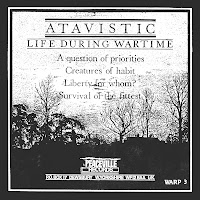 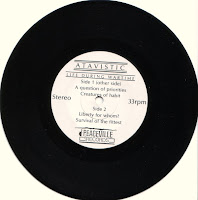 hello! il andrea"sveden" from italy! i see the link of my webzine CRUSTPUNK! thanx a lot! im write your
link in my webzine! i like this crustblog! this is my mail: sweden_it@yahoo.it
cheers from italy!
sorry for my bad english!
sveden

I really really enjoy your blog. I have always loved crust more than any other genre because it takes aspects from my favorite genres and throws them in a blender. Good shit.

Anyways, I have a SHIT TON of old crust/grind/d-beat/power violence records that I'd love to share that I've ripped personally and some rare shit I've found online (I'm a finnish hardcore/crust nerd :P) and would love to help out with your blog. My suggestion to you though, is that if you ARE going to rip records or tapes or CDs, rip them at 320 kbps and PLEASE include all the scans. Part of the beauty with crust records or punk records in general is the ENTIRE album packaging. I include full scans for all my records and try to hunt down all the artwork and best rips possible!

thanx Ryan! this is great, nice to hear this! i ll send e-mail as soon as i can. Crust artwork is awesome sometimes but always worth to be part of the stuff so it is included in ripped ep's as you see. but some of the ep's here, i ve found them on line, thats the reason why some 7"s do not include artwork. i guess i have to make a wanted ep's list sometime. thanx again and i ll get in touch as soon as i can

Hi Andrea CRUST PUNK, nice site, you ve done great work there, and Scatha stuff on radio is cool! Awesome! see ya around! :)

I agree (of course) w/ SomaHoliday & am willing to help out w/ scans of crust EPs by scanning the ones i have (a wanted list would be awesome!). Nevertheless, i disagree w/ the 320kbps suggestion - believe it or not, such blogs get also visited by people w/ dial-up connections (they're still the norm in many parts of this planet), & 320kbps would pretty much kill that.

Billy, I'll e-mail you back when I get home tonight.

I have about 200 EPs and around 70 LPs to upload when I get my computer fixed in May, so you'll have a shit ton of stuff to work with!

Glad I can help!

Great! I'm also into good/best quality mp3s (& can download them) & i can also help (in principle - time is an issue). I've a 30-year old record player at home at this moment & am still waiting for "my own" computer, but we'll work something out!