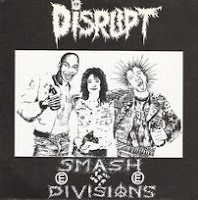 There is no much to say about this: Here is another Disrupt piece of noise coming from 1992: Smash divisions delivers ten live tracks, recorded in New Haven Connecticut in summer of 1991. This was released by SOA Records, according to the label "Fist pressing of 1200 copies went out in hard plastic bag, yellow/black labels and 100 copies in red vinyl. Following copies had soft plastic bag, different colored vinyls and white/blue labels." The record comes in gatefold cover including lyrics and in the usual crust trend the songs are not printed in the right order, though the back cover tracklist is correct :). I don't know in how many different colors this came out, i have seen a blue and a dark purple version, probably there must be some more colors.
i have to keep it short this time, check Disrupt official myspace for a detailed history and this blog for other Disrupt records. Actually this was posted in spring of 2007 in the first days of this blog, here you got it in a fresh new rip and this is a kind of the beginning of some reposts that will follow (Nausea, Panikos & other records that were posted in the first days)
Tracklist:
01) Smash Divisions
02) Refuse Planet
03) Eat Shit
04) No Values
05) G.A.M.E.
06) Rid The Cancer
07) Inebriayed
08) God Fearing Citizen
09) Cold War (Siege cover)
10) Squandered 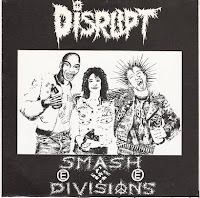 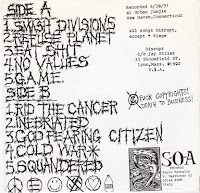 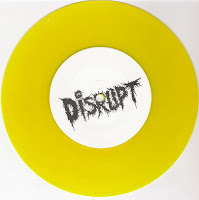 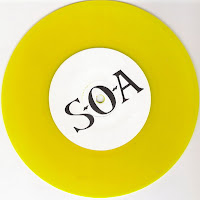 "religion is a fraud" the ultimate track

thanks for the lyrics!!

pitty it doesnt sound too loud.. but its still a great live album!

(its argentina's 200th "birthday", everyone seems so happy.. even with all the fucking poverty and hunger and low salaries.. fuck all these shitty patriots, fuck the soccer world cup, fuck Peron and all peronists, fuck this shitty country)

yeah the sound quality is a bit weak,but its a live recording thats why the shitty sound...

200th "birthday" of country? great! anniversaries like that are always a good chance for gov. to feed people's brains with more shit and if Maradona win the world cup this will cause a mass psychosis like the shit that happened here in 2004 when Greeks won the European cup:parades of thousands of assholes with flags on the streets every night.really pathetic...

Yes, there's been a massive parade, and the re-opening of an important theatre (wich its remodelation work has been delayed for years, and now its a great time for finishing it. Here, football equals mind control for the entire male population, now that our lovely president bought the football private signals so its free for everybody, and so EVERYBODY can watch the world cup, even the most poor sector of the population. it doesnt matter we cant get food, WE HAVE FREE FOOTBALL! motherfuckers. its unbelievable how people just let this shit be, and what is whorse, everyone accepts it with a smile on their faces. its gettin realy funny, although its a pitty i cant afford a piece of shit. i never felt so sick of this country before...


this is so fucked up, its just like the military government and the 1978 world cup, won by argentina. the perfect excuse.

there will be some more Disrupt posted here :)
yeah its the same massive paranoia everywhere.personally i like soccer,i have a/some favorite team/s,i watch some games on tv (and from time to time i even check how Boca Juniors is doing,hahaha) but only as a soccer fan. i have never been in a stadium, i m not member of a fan club, i have not any relation with such shit.
the soccer power on distracting people from real problems sometimes is incredible even when the masks fall:i remember some years ago a commercial on tv heavily influenced by Leni Riefenstahl's infamous documentary Olympia.is scary the fact than none of media people ever mentioned it,is scary how we eat the shit this time under liberal clothing...

i dont like football but i wont hide my past haha, i used to watch al boca's matches. What i hate most is its effect on people. and what i hate most than that, is the argentinian team, the "selection", i dont know how to say it.


well, ill be waiting for more Disrupt stuff! i want their lyrics jaja.... and you know, if you get Consume's live vid, please send it to me!

cheers from the arse of the world!!

hi guys. thanx for all the great posts.

I have a request guys!
about ten years ago, a website called "Icantbelieveitsnotgrindcore", which offered free grindcore / crust downloads, had the whole DISRUPT live tape this SMASH DIVISIONS recordings came from.

I can't remember why I haven't dl the mp3's, when I returned the site had close.

anyone has these recordings?

actually Petralia picked up 10 songs out of about 20 songs setlist!