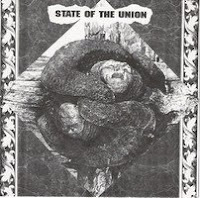 Someone requested this long long time ago, dude whoever you are, you got taste and sorry for this long lasting delay
Rez-Erection was the second ep of State of the Union and was released back in 1995 by Profane Existence in 3000 copies. God of Another Faith had seen the light of day a year later and in 1998 Profane released their s/t lp (1000 copies, sold out in a few weeks, never repressed). In 2000 the band recorded five tracks for an upcoming lp that never came out. Finally, Profane released SotU's discog in the long awaited To The Bitter End in 2008, including all their recorded material. In the meantime SotU called it a day and members went on with Wormwood, The Prids and other acts
Here' is the plot: Imagine Amebix back in 1989/90 taking the decision to go on for some more years, probably their new records would sound like their old stuff with 90's sound. And this is how State of the Union sound like in Rez-Erection: A modern version of Amebix and close to bands such as Neurosis and Sleep. Rez and God of Another faith have this dark crust feeling but here the songs have some hints of industrial-ish elements and clean acoustic breaks. In their lp the band made more steps to Christdriver territory by using more and more atmospheric elements, samples-intros, clean breaks etc and these can be found in their unreleased tracks too.
There will be no download link for this: To The Bitter End is out of print from Profane but available for downloading from Moshpit Tragedy, Rez tracks can be found there. Get it from there and check their metamorphosis from a crust band to something cold, industrial-ish emotional yet metallic, dark and great . 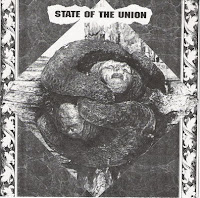 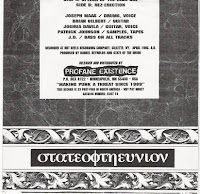 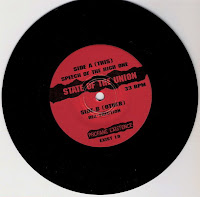 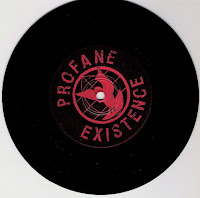 thank for the scans the problem with download sites is you dont get scans of front and back art and inserts with lyrics, i havent dl from mptragedy yet so i dont about them but it is not common to get scans, the from the depths dl you can get from the crimethinc website had full scans, artwork lyrics and all that, a lot oftimes you pay just asmuch for teh download as you would for actually buying the cd but get no lyrics to read.
ok
peace
ray ss

hey, i was the drummer / vocalist for state of the union. thank you so much for the kind words. i'm curious as to what the removed comment said, but i have a good idea who wrote it.

hey!thanks for the comment and your kind words,its always nice to see band members here.as for the removed comment,its been a long time and i can't remember what this "miss" wrote,actually i can't remember if either i or he/she himself removed it...