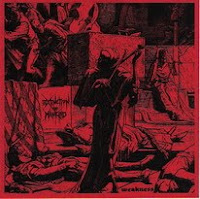 Ok, here we are again after this little break, not really break since some ep's are already ripped and scanned and wait for their turn, lets roll it: This is a repost from an Extinction of Mankind 7" that was posted in the first days of this blog: You know the band so there is no need to tell anything about them: Weakness delivers four tracks and 12:25" of the familiar to all of us Extinction of Mankind metallic crust, it was released in 1994 by Skuld Releases when the band still had the starting line up, 3.000 copies were made, the cover was white with red logo and a fold-out poster sleeve with lyrics and artwork, the red cover you see here is one of the 310 red covered copies that were made but are not fold out poster, actually the front-back covers of my copy are photocopies,wtf? probably there were 310 copies left without the sleeve and and Skuld Releases put em out this way, it could have been done better though.Anyway, even if this was released this way, it still is a nice record, an insert included here with lyrics and some artworks.
ps:Long long time ago someone requested the artwork of Scatha/Dagda-split,Whispy took a break from his vacation in exotic islands and his bussines with stockholders, CEO's and other punks , he decided to work on it and finally did it, see it, thanks Whisp :)
Tracks:
01:Weakness
02:Blood and tears
03:Fact or fiction
04:Outro 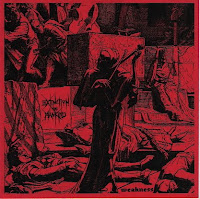 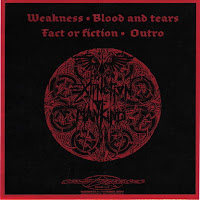 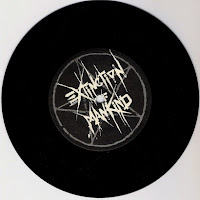 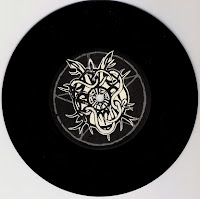 Gracias!i will post your demo/cd/12" in my other blogs,
cheers!!