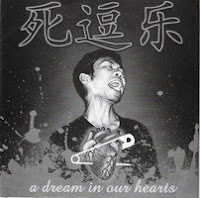 I know what you are thinking: Chinese punk? no way, this must be a joke! Japan needs no comment, Malaysia, Indonesia and Philippines have numerous bands but China? Well, its true: Honestly, these guys come from the city of Wuhan, China and this is their 7" released on a German label...
i know absolutely nothing about 死逗乐 (Si Du Le, thats how these ideograms are pronounced), here's some things from Rock in China: A dream in our heart came out in 2004 on Deprived & Devilish Records in 500 copies. This is their only release, in 2003 they appeared in Travel in Desert cd comp,released by the Wuhan based label Wuhan New Stone Culture, members were involved with 400 Blows and SMZB
This was the 3rd record ever released by a Chinese band. The url that is printed inside the cover must be their site but the link is dead, (freedom of speech is still unknown to some places), there are only a few things written inside the cover about the band (they started around 1998) and personal thoughts about their ideals, about punk and how it influenced their way of thinking. Nice words indeed. In 2005 they toured in central Europe (Germany,Italy,France, Austria etc) with Vialka (France/Canada), they called it quits a few years later
Check wiki about Wuhan location, if you know anything about Chinese scene just drop a line, the only thing i know is Area Death Productions the label that released Sore Throat's-Death to Capitalist Halmshaw cd
Now about the music: There are two tracks here delivering punk tunes much better than what you expect, lyrics are personal and included,sound quality is very good. are you curious about it? go get it! 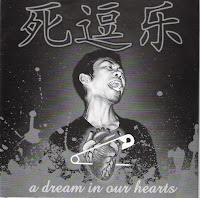 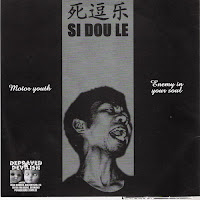 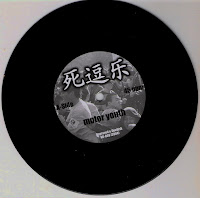 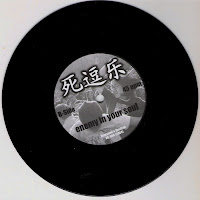 Anyone interested in checking out more of the Chinese scene should get some Fanzui Xiangfa. They play fast, skate-able hardcore out of Beijing.

Sol Under - The Site of Underground Bands from Argentina ,dedicated to spreading regional underground bands and Argentina THROUGH http://sol-under.blogspot.com/ your site. CHEERS

thanks for the Fanzui Xiangfa link mr -k anonymous
@ Sol Under: its nice to see a blog like this, i added you in the link list, cheers

Good stuff, will check it out.

There's nothing like "no way" about the Chinese punk scene at all, as the Western exploitation of their "exotica" began to boom as far as back in late '90s, already. Fanzui Xiangafa are a bunch of foreigners living in Beijing, except their singer.

Yeah, I haven't heard very many bands from China, so I appreciate the exposure(Billy and everyone else).

This rips - pure & simple. Batguano, I see that not even Tian An Men 89 has released a N. Korean 7", & they go well out of their way to release the craziest (geographically) stuff possible!

Great blog!
I don't know much about the Chinese scene either except for some stuff I have from a female-fronted outfit called Overdose which is pretty good!

However, I am a fan of Chinese pop-culture & study Chinese. Occasionally, you can run across some obscure stuff on VeryCD p2p site (in Chinese, though and you need the eMule client installed). If in the future I find any treasure troves of Chinese punk there, I'll come back.